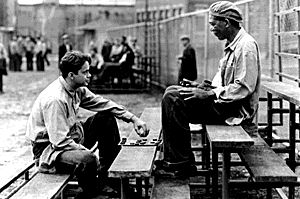 Inmates Andy (Tim Robbins) and Red (Morgan Freeman) play checkers in a scene from The Shawshank Redemption, winner of the 1994 Scripter Award.

In effect, Darabont competed against himself: his screenplay for MaryShelley’s Frankenstein was another nominee for this year’s award.

Darabont, who also directed Shawshank, adapted his screenplay fromKing’s novella, which appeared in his 1982 collection of short fictionDifferent Seasons. A period drama spanning the years 1946 to 1967, TheShawshank Redemption is the story of a soft-spoken, respectable banker(played by Tim Robbins) who is condemned to a double life sentence forthe murders of his unfaithful wife and her lover. He is sent toShawshank State Prison, a tough maximum-security penitentiary. There heforges an unlikely friendship with a seasoned lifer, Red (played byMorgan Freeman).

“It is very much a gentler Stephen King than people are used to,”Darabont said. “Many people didn’t know that Stand by Me was written byKing, from the same collection of stories from which this film istaken. This is much more in that spirit than any of the other moviesthat have been made [from his works].”

Darabont’s other credits include the 1988 remake of the sci-fi thrillerThe Blob, the sequel to David Cronenberg’s remake of The Fly and thereworking of the Shelley classic Frankenstein.

The Scripter Award, which is sponsored by the Friends of the USCLibraries, was chosen by a selection committee chaired by Marjorie LordVolk. Any English-language movie based on a book and released in 1994was eligible for nomination. The Shawshank Redemption edged out fourother finalists for the award: Paramount Pictures’ Forrest Gump andNobody’s Fool, Columbia Pictures’ Little Women and Hollywood Pictures’Quiz Show.