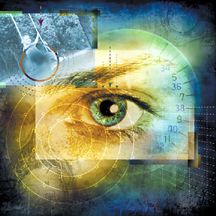 If you can read these words, you have your macula to thank.

Your retinal macula gets the credit if you can tell a purple plum from a red one or recognize the face of the guy who sells you your morning coffee.

But your macula rarely gets its due. Even though this paper-thin spot of tissue in the center of your retina is single-handedly responsible for much of what we think of as sight, most of us have never even heard its name, much less spent any time considering its role in our lives.

Until, that is, it begins to fail.

Because the macular area of the retina is responsible for what is clinically referred to as “central vision,” a macula that begins to deteriorate—a process known as macular degeneration—leaves behind only a peripheral view of the world. Living with macular degeneration is like looking out from behind a sort of optical eclipse. It creates a world that can be seen only at its curved, distorted edges. At the center of that world—indeed, at its very heart—is distortion and darkness. Unremitting, ever-expanding darkness.

Some 200,000 people enter this darkening world each year—which means that about 4,000 people are afflicted with macular degeneration each week. Age-related macular degeneration is the leading cause of severe vision loss in the elderly. It is currently robbing sight from 1.7 million of the 34 million Americans who are over age 65. The National Eye Institute (NEI) reports that number may reach 6 million by the year 2020. And yet, studies have shown that only 30 percent of the adults in this country are familiar with the disease.

Macular degeneration may be under-recognized by the general public, but it is given both recognition and respect by the researchers and physicians at the USC-affiliated Doheny Eye Institute, which is consistently ranked among the top eye centers in the nation. Here, macular degeneration is all too familiar a foe. And here, if Keck School of Medicine researchers have their way, this blinding disease will be conquered.

“Macular degeneration represents the greatest challenge facing vision researchers today,” says Stephen J. Ryan, M.D., dean of the Keck School and president of the Doheny Eye Institute. He would know. Ryan has been working to understand and treat this destructive disease for more than a quarter of a century. He recently received a $1.3 million renewal on a grant from the NEI that is now in its 25th year.

Ryan is in no way alone in his quest, however. Earlier this year, when the Arnold and Mabel Beckman Foundation announced a six-year, $10 million grant to the Doheny to establish the Beckman Macular Research Center, it was the depth and breadth of the Doheny’s research effort into macular degeneration that was most roundly lauded. George Argyros, chair of the Beckman Foundation Board, talked about the great research environment of the Doheny and the Keck School, and praised the faculty and the potential of their research to make a major difference as the driving force behind the generous award.

Vision is an almost unutterably complex process that begins when light enters the eye and is absorbed by the cells of the retina. Those cells transform the light into a nerve impulse that races to the brain, where it is decoded and interpreted.

At the outer edges of the retina, that transformation is a relatively crude affair. Thousands of retinal cells hook up with each nerve cell to send their messages careening into the brain; it is almost impossible to discern detail with such a cell-to-nerve ratio. But in the macula—which resides in an area of the retina that is just five millimeters in diameter—only a few retinal cells hook up to each nerve cell. It is also in the macula where the greatest concentration of the eye’s light-sensitive rods and cones are found. Rods give us night vision and allow us to detect motion, while cones allow us to see detail and color.

The problem is that the macula gets hit hard by the aging process. “As we age, the cells in the eye that allow us to focus on fine details—the letters on the page of a book, the face of the person across from you—slowly degenerate in many people,” says David Hinton, M.D., the Gavin Herbert Professor in Ophthalmology and a professor of pathology and neurosurgery.

Adds Ryan, “You are born with a fixed number of vision cells—they die and decrease in number with the wear and tear of a lifetime of use.”

What causes this dropout in the macula—dubbed age-related macular degeneration or AMD—is unknown. There are two types of AMD. Dry, or atrophic, macular degeneration is more common than the so-called “wet” form of the disease. Early changes of dry AMD affect more than 20 percent of people over the age of 65, but these changes are less destructive, and rarely cause severe blindness. Dry AMD comes on slowly and is characterized by programmed cell death, or apoptosis, and the loss of photoreceptors and other related cells in the macula.

But it is wet AMD, which causes the greatest harm, that the Doheny researchers have been focusing on. Also called exudative or neovascular macular degeneration, wet AMD results when abnormal blood vessels grow from the choroid layer underlying the macula, an area rich in blood vessels. The center of the macula is avascular—it does not have its own blood supply—which allows it to make fine visual resolutions. “To understand macular degeneration we must understand what is going on in the choroid as well as in the retina,” says Ryan. “The abnormal blood vessels that grow from the choroid into the macular region can hemorrhage or leak fluid or scar and cause irreversible damage to the cones and rods. We need to determine how this happens and find ways to prevent it.”

Banishing this major threat to the vision of millions of people worldwide—particularly the elderly—will require a continuing, major research effort, says Ryan. At the Keck School—and, in particular, at the Doheny and the newly created Doheny Retina Institute—that effort is on-going, all-consuming and propelled by grants and gifts from places like the NEI and the Beckman Foundation.

“The incredibly generous $10 million award from the Beckman Foundation will result in a much better understanding of the disease,” says Ryan. “We believe that our multidisciplinary basic science approach presents the best hope of developing prevention strategies, and ultimately treatments, for this devastating disease.”

David Hinton, M.D., will be seeking to establish the precise molecular mechanism and pathways that allow for the abnormal blood vessel growth, or angiogenesis, that occurs under the retina in AMD. In collaboration with angiogenesis researchers on the USC Health Sciences Campus, Hinton and his team are looking at a number of different ways to “stop the sprouting of blood vessels in the macula,” he explains.

Ralf Langen, Ph.D., assistant professor of biochemistry and molecular biology, will be using cutting-edge chemical approaches to analyze characteristics of the abnormal extracellular deposits called drusen that accumulate in the macula of patients with AMD. “Until we know what these deposits are,” notes Langen, “we won’t know how to stop them from forming.”

Jeannie Chen, Ph.D., assistant professor of ophthalmology, will seek a better understanding of the way in which photoreceptor cells—which are at risk of dying in AMD—manage to capture single photons of light and transform them into a visual experience. “Basic research tells us exactly why things work, in the most molecular detail possible,” she says. “It’s only by understanding how things work that you can fix them.”

Timothy Triche, M.D., Ph.D., pathologist-in-chief at Childrens Hospital Los Angeles, is looking at which genes and proteins are expressed in models of macular degeneration, utilizing high throughput genomic and proteomic techniques, which allow researchers to analyze the sequences of huge numbers of genes and/or proteins at a time.

“The Beckman Foundation is pleased to be able to support the Doheny Eye Institute’s research efforts in AMD,” says Jacqueline Dorrance, executive director of the Beckman Foundation. “The funding of this project will dramatically expand the scope of macular degeneration research and will provide a framework for expanding current NIH and private research support.”

Indeed, the hope is that these grants and gifts will lead to new and better treatments based on a fundamental understanding of how the abnormal blood vessels grow under the retina. Certainly, that is the impetus behind the Beckman Foundation’s gift and the ongoing NEI grant.

“The progress in understanding macular degeneration that has occurred over the 25 years of the NEI grant is really quite remarkable,” says Hinton, who is a key leader and co-investigator on that grant as well. In the early years of the grant, he notes, the first reproducible animal model of exudative macular degeneration was developed in Ryan’s lab. To this day, it remains the gold standard for the study of this disease and the evaluation of new therapies.

In subsequent years, the grant helped to determine which cells are involved in the initiation and progression of the abnormal blood vessel growth. This was followed by elucidation of the specific growth factors involved. The grant is now focused on determining the molecular mechanisms of growth factor action in the unique environment of the outer retina and developing strategies to block those growth factors’ effects.

For example, Hinton and Ryan have recently shown—using a well-known gene therapy vector—that the over-expression of a portion of one growth factor receptor causes that receptor to mop up most of the growth factor found in the retina. This, they found, significantly inhibits the growth of blood vessels under the retina in Ryan’s animal model. If it were to do the same in humans—a thread of inquiry that the researchers will obviously be pursuing—it could be used to stop the growth of the rogue choroid blood vessels that cause much of the trouble in AMD.

Still, Ryan and Hinton, along with ophthalmology laboratory manager Christine Spee and a cadre of other Keck School researchers are continuing to look at other ways of breaking down this sight-robbing disease. They are probing individual cells, investigating chemical messengers, and looking for new animal models that may help them in their vision quest.

“Our research team has accomplished a lot in the last 25 years,” says Ryan. “And I’m certain that we will accomplish even more in the years to come.”

IF YOU CAN READ THESE WORDS

Nothing but a number: At 37, former Trojan swimmer heads into sixth Olympics

Oussama “Ous” Mellouli is one of only four swimmers in history to participate in this many Olympic Games. But before he made his name as an all-time great, he was a proud All-American at USC.

Rai Benjamin moved on to the final in the 400m hurdles and all four women’s water polo teams with Trojans on their rosters advanced to quarterfinal play on Day 9 of the Tokyo Olympics.