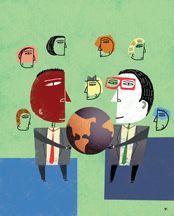 People living in Hawaii and Los Angeles are being followed. But they are not nervously looking over their shoulders or trying to get away.

In fact, they have filled out extensive questionnaires, given samples of their blood and allowed physicians to track them over an entire decade, collecting and collating their personal medical information.

They number more than 215,000 people. They are African American, Latino, Japanese, white and Native Hawaiian.

They are the Hawaii/Los Angeles Multiethnic Cohort, and 2003 was their 10-year anniversary.

Cohort studies are starting to gain a lot of attention from physicians, epidemiologists and public health specialists, not to mention both the public and the media. The Women’s Health Initiative—the study that brought to light the health risks of hormone replacement therapy—is a cohort study; so are the American Cancer Society’s Cancer Prevention Studies, which have been looking at the roles of environmental and lifestyle factors in cancer since 1959.

These studies are known as prospective studies: Researchers gather together a group of volunteers, take some initial measurements or samples, and then follow those people over time to find out which of them develop one of any number of medical conditions. This contrasts with the more traditional, so-called retrospective studies, in which a group of patients with a particular condition to be studied is found, and the researchers then look back at their experiences and exposures for common traits.

What makes the Multiethnic Cohort study unique even among cohort studies is both its size—it is one of the three largest ongoing cohort studies in the world—and its incredible diversity. With representatives from five major ethnic groups, the cohort is a virtual goldmine of information not only about genetic and environmental influences on disease, but about the disparities in rates of disease across ethnic groups.

And the mining has only just begun.

When the cohort began, in 1993, it was a much smaller proposition, with Keck School researchers and colleagues asking people to fill out a detailed questionnaire on nutrition, and hoping to relate the results gathered to individual risks of breast, prostate and colorectal cancer.

Three years into the study, the National Cancer Institute (NCI) at the National Institutes of Health began to support the study, giving the research team a five-year, $10 million grant. In 2001 that level of support was raised to $26 million for continuing and new research.

That, says Brian E. Henderson, M.D., the Kenneth T. Norris Jr. Chair in Epidemiology, director of the Zilkha Neurogenetic Institute, and the cohort’s co-principal investigator, has enabled the research team to really broaden its goals and vision. While researchers continue to look for links between nutrition and cancer—as well as between cancer and other environmental factors such as smoking and exercise—they now have the ability to begin looking for genes that make people either more or less susceptible to cancer.

The research team also received a data boost when the NCI decided to start a cohort consortium composed of six, large-scale epidemiologic groups. The Multiethnic Cohort’s inclusion in this consortium, says Henderson, will boost the cohort’s power significantly. “We’re looking for small effects, so it will be a huge help to be able to combine forces with other people,” he explains. “For instance, while we might have 1,700 cases of breast cancer in the Multiethnic Cohort, there will be 6,000 cases in the consortium. You can tell a lot more from 6,000 cases than you can from 1,700.”

The science coming out of the cohort is being shaped and guided by a large group of researchers, including Henderson. The cohort’s co-principal investigator is the University of Hawaii’s Laurence Kolonel, M.D., Ph.D., who is also deputy director of the Cancer Research Center of Hawaii. Malcolm Pike, Ph.D., Keck School professor of preventive medicine, is not only a key player in the research being done with the cohort, but has acted as mentor to many other faculty and students working with the group.

The most recent renewal of the cohort’s grant has allowed these scientists to formalize their connection with one of the preeminent genetic research labs in the world—the Broad Institute (formerly known as the Whitehead Institute Center) for Genome Research at the Massachusetts Institute of Technology. “Our collaborators in Cambridge are playing a leading role in the use of the cohort to find genes that affect susceptibility to cancer,” says Daniel Stram, Ph.D., associate professor of preventive medicine at the Keck School of Medicine, who has been responsible for developing key statistical methodology used for the design and analysis of the cohort’s genetic studies.

But the heart of the cohort is the people whose lives—and genes—are being scrutinized. The people in the Multiethnic Cohort get very little compensation for their participation. And yet, when the request went out, 215,000 of them stepped up to the plate. They do it, they say, in the hopes that the researchers will use the information they gather to save lives. They do it, they say, for the good of science.

And the science is very, very good. Despite the fact that 10 years is not much more than an eye blink in the world of epidemiology—where scientists often need to follow subjects for a lifetime, if not over several generations, before being able to tease answers out of the voluminous data collected—the cohort has already begun to yield nuggets of information, including the following:

• Data showing that changes in environmental factors, particularly diet, play a role in the increasing incidence of colorectal cancer in Latinos of Mexican origin.

• Preliminary findings that a variation of a gene that plays a key role in the synthesis and metabolism of estrogen—CYP17—may indicate increased susceptibility to endometrial cancer in women who take estrogen replacement therapy.

• An even-more-recent study of women in the cohort revealing that another estrogen-metabolism gene—CYP19—has a variant that appears to be linked with an increase in breast cancer susceptibility.

• Evidence that African Americans in Los Angeles have hypertension that is more severe and found at higher rates than in Latinos, a finding that carried across both genders.

In addition to these significant findings, Pike and his colleagues established that, even after adjusting for all other factors, native Hawaiian women have a significantly increased risk of breast cancer as compared to white women. They further found that while Japanese-American women have less risk for breast cancer than the native Hawaiian women, their risk is still higher than the white women as well. “The slight excess in breast cancer risk of the Japanese Americans compared with the whites is most striking,” wrote Pike and his colleagues. “This comparison is in sharp contrast to the very low breast cancer rates that were observed in traditional Japanese women and in early Japanese migrants, which were only one-sixth the rates of U.S. women.”

Even more important than these individual findings—and the dozens that are about to follow them into the scientific literature—is the promise that the cohort holds for the future. With the human genome now an open book, Henderson and his colleagues are convinced that these large, prospective populations studies are going to yield significant, groundbreaking scientific findings. “The studies that we’ve been doing strongly support the hypothesis that these new genetic approaches may yield valuable information on common traits,” says Henderson.

And applying these approaches to a variety of ethnicities can be even more revealing. “When you see that a finding holds across ethnic groups, it makes the association between the genetic risk factor and the disease risk even more convincing,” notes Christopher Haiman, Sc.D., Keck School assistant professor of preventive medicine and researcher at the Zilkha Neurogenetic Institute.

“Another thing that distinguishes the cohort is the depth of the commitment of the NCI to this study. We are funded to collect biological samples including blood, buccal [the inside of the cheek] cells and urine in as many as 100,000 participants. This collection effort will take years to complete, and will support both genetic and nutritional epidemiology at truly world-class levels for decades into the future.”

Says Henderson: “We’ve provided everybody a glimpse of what you can see when you look across different populations. The richness of the exposure to these ethnic variations multiplies what we can learn. Having this huge range of different people makes the Multiethnic Cohort a very rich resource.”

The recent National Cancer Institute renewal of the grant supporting the cohort—a $12-million vote of confidence—is allowing the scientists involved in the project to do something they were previously unable to do: take actual genetic samples from the participants in the cohort, and examine them for large numbers of genetic variations.Although the Multiethnic Cohort began simply—as a way to study diet and other environmental factors and their contribution to cancer risk in a variety of ethnicities—it has since expanded well beyond those borders.

With those samples in hand, the cohort’s co-principal investigator Brian E. Henderson, M.D., and his colleagues will be combining the resources at the Broad Institute for Genome Research at the Massachusetts Institute of Technology and the statistical prowess of the Keck School Department of Preventive Medicine to scour those cells for variations in more than 50 different genes. And that is only the beginning. More genes, relating to more forms of cancer or to other diseases entirely, will be added as the cohort team gathers both speed and steam.

This genetic study could not have been done 10 years ago, notes Henderson, because the technology that allows them to speed through the analysis of hundreds of samples at a time simply did not exist. “This study is really unique in its diversity,” Henderson says. “As long as it’s a question you can ask, or a disease you can monitor, we can investigate it.”

Vapers show changes linked to cancer in their DNA

According to scientists at the Keck School of Medicine of USC, the chemical alterations in people who vape are similar to those found in cigarette smokers.

Between childhood and adulthood, young people with cancer may feel ignored and misunderstood — but USC researchers won’t let them be forgotten.

Rong Lu of the Keck School of Medicine of USC will use a $550,000 grant from the Leukemia & Lymphoma Society to continue investigating aggressive and resistant types of leukemia.