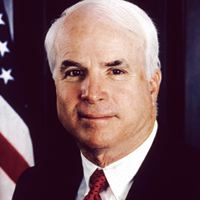 USC President Steven B. Sample will confer more than 10,000 degrees to graduating students in ceremonies starting at 8:30 a.m. in USC’s Alumni Memorial Park. The event will be simultaneously Webcast on the Internet, enabling families around the world to watch and listen.

“USC is honored to have Senator John McCain as our commencement speaker,” said Sample. “As a veteran, a statesman, a leader and an author, he has distinguished himself in his commitment to public service and to the importance that ethicality, respect for others and courage should have in our daily lives.”

After delivering the commencement address, McCain will receive an honorary degree from USC, along with visionary string theorist Ed Witten.

John Sidney McCain was born in the Panama Canal Zone in 1936. At age 17, he enrolled in the U.S. Naval Academy at Annapolis, following in the footsteps of his father and grandfather, both of whom were Navy admirals.

After graduating in 1958, McCain became an aircraft pilot and went to fight in the Vietnam War.

In July 1967, a missile from a nearby plane on the flight deck of the aircraft carrier USS Forrestal struck McCain’s A-4 Skyhawk as he was preparing for a bombing run. McCain managed to escape his plane and dive into the fire on the ship’s deck, but 134 men lost their lives in the worst non-combat-related accident in U.S. Naval history.

Three months later, McCain’s plane was struck down by a missile over Vietnam, and he was taken captive, spending the next five years – two in solitary confinement – as a POW in the dreaded “Hanoi Hilton.”

When the North Vietnamese realized they had captured the son of Admiral Jack McCain, the commander of all U.S. forces in the Pacific, they offered their prisoner early release – an offer the younger McCain repeatedly refused, citing the code of conduct that prisoners of war be released in the order in which they are captured.

McCain and his fellow POWs were released in 1973, and McCain became the U.S. Navy’s liaison to the U.S. Senate. Divorced from his first wife, he married Cindy Hensley, a USC alumna, in 1980.

McCain, a Republican, set his sights on the political world and was elected to Congress in 1982, representing what was then the first congressional district of Arizona. He became a senator in 1986. Now in his third term, McCain has become a vocal opponent of pork-barrel spending and an advocate of campaign finance reform and Native American rights.

McCain is a best-selling author of books including “Why Courage Matters: The Way to a Braver Life,” “Faith of My Fathers: A Family Memoir” and “Worth the Fighting For.”

McCain has seven children and four grandchildren. He and his wife live in Phoenix, Ariz.

For the a-z on commencement, go to: https://www.usc.edu/dept/pubrel/specialevents/commencement.