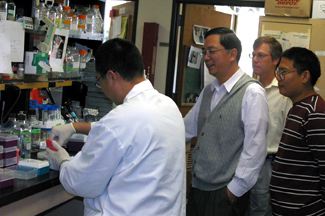 Cheng-Ming Chuong (second from left) and his colleagues have provided the first molecular glimpse at the morphogenesis of feathers.

Scientists from the Keck School of Medicine have, for the first time, shown experimentally the steps in the origin and development of feathers, using the techniques of molecular biology. Their findings will have implications for the study of the morphogenesis of various epithelial organs—from hairs to lung tissue to mammary glands—and is already shedding light on the controversy over the evolution of dinosaur scales into avian feathers.

A paper describing this work, “The Morphogenesis of Feathers,” au-thored by principal investigator and pathology professor Cheng-Ming Chuong and his colleagues, was selected for advance online publication in the journal Nature and became available Oct. 30.

“The feather is one of the best research models you can find for understanding the basic molecular pathways used by all epithelial cells,” said Chuong. “Scientists agree that whether you’re looking at a human mammary gland or a chicken feather, epithelial cells use the same underlying logic, the same grammar, to form an organ. But unlike a gland, a feather really lays everything right out there for you.”

The question of what makes a feather a feather became rather heated with the discovery in China in the 1990s of fossilized dinosaurs like the Sinorthosaurus (Chinese bird-dinosaur), with branching skin appendages on its skin. “Some say these things are feathers, some say they’re protofeathers, others say they’re not feathers at all,” Chuong explained. “Everybody wants to know which one is the real first feather.”

And they want to know how it came to be, as well. Over the years, Chuong said, paleontologists trying to trace the evolutionary connection between dinosaurs and birds have examined how a reptilian scale might turn into an avian feather.

Most adult feathers have a backbone, or stem, called a rachis, from which the feather’s barbs branch. Each individual barb then branches again into the feather’s smallest unit, the barbule, which is composed of a single row of epithelial cells. Downy feathers, like those on a chick, lack rachides altogether and are made up of just barbs studded with barbules. The standing hypothesis among many paleontologists has long been that the scales on dinosaurs must have lengthened into rachides that then became notched to form barbs and barbules. But there had been no real molecular evidence to either back up or refute that argument.

In their Nature paper, Chuong and his colleagues demonstrate how barbs and rachides are formed in a modern chicken, and at the same time show that the evolution from scale to feather most likely followed a path in which the barbs formed first and fused to form a rachis—rather than a rachis forming first, and then being sculpted into barbs and barbules. This interaction between evolutionary biology and developmental biology (dubbed “evo-devo”) is a relatively new marriage of two previously disparate fields.

To come to their conclusions, Mingke Yu, a postdoctoral fellow and first author on the paper, along with others in Chuong’s laboratory, developed a novel way to genetically manipulate different genes during feather formation. They plucked feathers from chickens, then prompted the chicken to regenerate those feathers under controlled conditions, raising and lowering the expression levels of the genes in question on an individual basis and observing the effects they had on the organization of epithelial cells into different feather forms.

Among others, three genes in particular—noggin, bone morphogenetic protein 4 (BMP4), and the whimsically named sonic hedgehog (Shh)—were found to result in new feathers that were rife with abnormal organization in their rachides and barbs. When Chuong’s team increased the expression of noggin, for instance, they found that the rachis began to split into several small, thin rachides, and the barbs increased in number. When they increased the expression of BMP4, with which noggin interacts antagonistically, they found that the feather’s rachis became gigantic and its barbs merged and were reduced in numbers. In this way, the scientists were able to manipulate the number and size of the feather’s barbs and rachides.

Finally, when they suppressed Shh, they found a residual webby membrane between the normally separated barbs. Said Chuong: “The cells there were supposed to go through apoptosis, or cell death, in order to create the space between the barbs. But when we took away the sonic hedgehog signal, cell death no longer occurred. It is a similar process that occurs in the web of duck feet.”

What can these new findings on the morphogenesis of feathers tell us about their evolution? “These results suggest that the barbs form first and later fuse to form a rachis, much like downy feathers are formed before flight feathers when a chicken grows up. Under the general rule of ontogeny repeating phylogeny, downy feathers made only of barbs probably appeared before the evolution of feathers with rachides and capable of flight,” Chuong said. “However, pinning down the exact moment at which dinosaur scales become chicken feathers is impossible. Just like Rome, feathers are not made in one process. It took 50 million years for nature to refine the process, to transform a scale into a flight machine. There were many, many intermediate stages.

“While Darwin’s theory has explained the ‘why’ of evolution, much of the ‘how’ remains to be learned,” Chuong added. “Evo-Devo research promises a new level of understanding.”

These findings also have medical applications, noted Chuong. “With this study, we learned more about how nature guides epithelial stem cells to form different organs. For example, BMP, Shh and noggin are also used in different ways in making lungs, limbs and spinal cords. By analyzing these models, scientists may be able to fully understand nature’s ‘grammar,’ and learn to use it in repairing or regenerating tissues and organs, which we call tissue engineering.”

In a first, Keck researchers show how feathers evolved