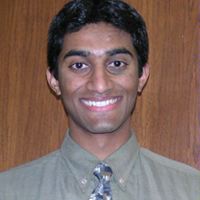 Valedictorian Chacko’s commitment to service is foremost in his academic endeavors.

David Chacko, USC’s 2004 valedictorian, is a student with an impressive array of accomplishments – including being named a 2004 Marshall Scholar this spring. He credits his parents as the inspiration for his achievements.

Chacko’s parents, who were born in the Indian state of Kerala, emigrated to this country in the early 1970s. His mother, Leela, is an emergency room physician; his father, Jacob, is a mechanical engineer and CEO of T&K Mechanical of Torrance.

“Our parents taught my brother and me that hard work really does pay off,” Chacko said.

Indeed, his parents’ own hard work has paid off. His older brother, Jacob, was USC’s class of 2000 valedictorian and was also named a Marshall Scholar.

Raised in Rancho Palos Verdes, Chacko entered USC as a Trustee Scholar, an academic honor given to entering freshmen. The award pays all tuition costs for four years. He was also selected for USC’s baccalaureate/M.D. program, which guarantees entrance to the Keck School of Medicine of USC after graduation.

Currently a premed student in USC College and in the honors business program at the USC Marshall School of Business, he must decide by May 15 whether to attend medical school at USC, UCLA, UC San Francisco or the University of Pennsylvania.

Chacko’s dual interests in medicine and health policy led him to study both biology and business administration, earning a 4.0 grade-point average. He hopes to become a leader in health policy, as well as a physician to the medically underserved, addressing what he sees as the enormous challenges facing Americans today – balancing issues of cost, access and fair distribution of health services.

“Part of the reason I want to pursue health policy is that I want to help our country’s 43 million uninsured people. Practicing in a clinical setting improves the community, one person at a time, which is great. But health policy changes have the potential to impact thousands or millions of people at a time,” Chacko said.

The Marshall scholarship, which is offered to 40 American students annually, allows students to attend graduate school at a British university with all expenses paid by the British government. The two-year scholarship, which will represent a detour on the way to medical school, will allow him to study health-care systems and policies from around the world at the University of Oxford, where he aims to earn a master’s in philosophy.

The versatile Chacko also has been a starting defender on the USC men’s soccer team since his freshman year. He looks forward to playing in England, a country that is as passionate about the sport as he.

Chacko’s commitment to service is foremost in his academic endeavors. He is the co-founder and program manager of the Collegiate Med Volunteers program at the LAC+-USC Medical Center, which now counts 150 students from 17 universities among its members.

He co-chairs the USC Trustee & Presidential Scholars organization, where he manages a budget of $25,000, and is a student member of the USC board of trustees’ alumni affairs committee. He also has served on the social science panel of the university and provost committees and is currently on the student behavior appeals panel.

Judi Biggs Garbuio, associate dean of student services, said that from stuffing envelopes to overseeing steering committees, Chacko is willing to step in and help anytime.

“David is one of those rare people who is able to be the leader or a follower,” Biggs Garbuio said. “His dedication to service is incredible.”

Among his many other service activities, he has volunteered in clinics in rural India and in the emergency rooms of Los Angeles.

He has served as a resident adviser since the end of his freshman year and currently serves as one of eight senior resident advisers, overseeing the residential student government. He said the enthusiasm of the freshman students he guides rubs off on him.

While Chacko has earned many prestigious national and university awards, one honor that stands out to him was being named “Mr. USC” and member of the USC Order of the Torch – a distinction that recognizes seniors who best demonstrate campus leadership and service, in addition to scholarship.

“I was excited to receive that award, one that acknowledges a student’s commitment to extracurricular involvement and his ability to get others involved,” Chacko said. “That my peers and administrators have recognized my service contributions has been a motivating factor that keeps me going.”

Neurobiologist Albert Herrera, a professor of biology in the college who has performed original research with Chacko, is most impressed by his ability to manage time and focus on the project at hand.

“I don’t know when he sleeps,” Herrera said.

With Herrera, Chacko studied the development of neuromuscular junctions in the frog – a technically difficult research project.

“David mastered the technical aspect, and his results contributed to the research. I can’t say it’s impossible for an undergrad to do work at this level, but it is fairly rare,” Herrera said.

Chacko is a recipient of the USC University Trustees Award and the Phi Beta Kappa Honors Recognition Award and was named to the USA Today All-USA College Academic First Team, which recognizes the top 20 undergraduate students in the nation.

He is also a member of the Phi Beta Kappa Honor Society and a Dean Schaefer Scholar, among other honors.

“The sky is the limit for David – right up to serving as the U.S. surgeon general. Whatever he sets his mind to do, he will do it,” Biggs Garbuio said.

The Sky’s the Limit