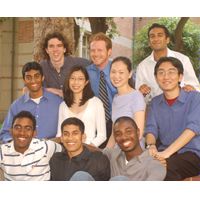 More than 200 USC students who embody the innovative and interdisciplinary ideals of Renaissance thought will be honored at the USC Senior and Graduate Recognition Awards Ceremony Thursday, May 13.

In addition, 10 scholars who won $10,000 USC Renaissance Scholar Prizes will be honored individually at the Bovard Auditorium ceremony beginning at 1 p.m.

A total of 239 Renaissance Scholars will be recognized for accomplishments in widely varied academic-program combinations. That number represents a significant jump from the 161 scholars honored in 2003.

Among the 2004 prizewinners is David Chacko, also this year’s valedictorian. With this latest honor, he has officially duplicated the accomplishments of his older brother, Jacob, who served as his graduating class’ valedictorian in 2000 and was also a Renaissance Scholar that year. Both brothers won Truman and Marshall Scholarships.

To be considered for the scholar designation, students submitted their course of study to a faculty panel, which evaluated it for breadth and depth of intellectual investigation. Students who met the panel’s criteria and who graduated within five years of undergraduate study with an overall grade-point average of 3.5 or better and a GPA of 3.5 or better in their major and minor course requirements, then received the Renaissance Scholar honor.

The 2004 Renaissance Prize winners are:

• Jonathan Boyd, major in health promotion and minor in classics and natural science.

• Evan Jesch, major in biology and minor in history and musical studies.

• Neil Vora, major in international relations and biology and minor in philosophy.

• Nilay Vora, major in interdisciplinary studies and mathematics and minor in natural science.