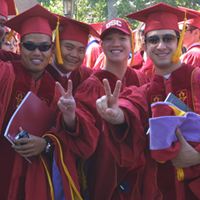 More than 10,000 USC students celebrated their graduation May 14 as speakers encouraged them to live ethically and courageously and to serve others.

“You are now and always will be Trojans for life,” Sample said.

The president said the university had recently adopted a code of ethics that calls for “honesty, fairness and respect for others.”

This theme of outward actions as reflections of inner values was also the cornerstone of speeches by valedictorian David Chacko and McCain.

Chacko – who leaves behind a legacy of outstanding academic achievement, community service and social involvement at USC – said there were three things that defined who he was as a Trojan: the support he received at the university and at home; a strong desire to help others; and a need to help the underprivileged.

A premed student with a double major in biology and business administration, Chacko maintained a 4.0 grade-point average, acquired a slew of elite academic credentials and started the Collegiate Med Volunteers program at LAC+USC Medical Center. He plans to become a doctor.

He said that while his parents inspired him and instilled an “unshakeable work ethic,” it was USC that taught him the importance of giving to others.

McCain, a retired Naval aviator, author and longtime public servant, spoke not of compassion, but of courage.

“Without courage, honesty, compassion, justice, happiness and love are fragile qualities – admired, sought, professed, perhaps, but held cheaply and surrendered without a fight,” he said.

Over the past three decades, America has essentially diluted the definition of courage, he added.

“We have attributed courage to all manner of actions that may indeed be admirable, but they hardly compare to the conscious self-sacrifice on behalf of something greater than self-interest that once defined courage,” he said.

An example of real courage, McCain said, was the life of Pat Tillman, who gave up a professional football career to enlist in the Army after the Sept. 11 attacks. Tillman was killed in action in Afghanistan last month.

“ … It was his unexpected choice of duty to his country over the riches and other comforts of celebrity that proved his courage,” McCain said. “In earlier generations, many professional athletes risked such a sacrifice for their country. It’s rather rare today.”

McCain also told the story of a fellow POW during the Vietnam War. The man was a “fierce register, maybe the bravest of us all,” McCain said, but after one particularly rough interrogation, the officer was unable to reply – by tapping on the cell wall – to McCain’s queries about what had happened.

“The tap never came,” he said, noting that while physical courage can fail you, moral courage is more “certain.”

“We all have to face fear and make choices in our lives: to act or not, love well or not, to be brave or not. One in ten thousand of us, if that many, will make the choice Pat Tillman or Dr. [Martin Luther] King made,” McCain told the crowd.

“We will face choices, not as dire as theirs, perhaps, but the quality of our lives will depend on them nevertheless.”