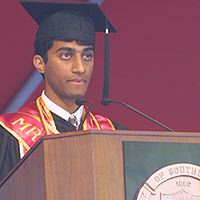 “Just as those before me have helped me succeed, I am here to help others become successful as well,” said Chacko during his May 14 address.

Valedictorian David Chacko delivered his address during USC’s 121st commencement ceremony, Friday, May 14, 2004. The following is the full text of his speech.

When I returned to my building last night, I was unable to get inside because my USC card had been deactivated. I hope that doesn’t mean the university found out about my unpaid parking tickets. And I certainly hope that I will still be allowed to graduate today. As I sat outside the building trying to find a way inside, I began thinking about the three themes that have defined my time as a Trojan. As the student chosen to speak on your behalf, I invite you to reflect on these examples to understand how your own experiences have been shaped.

First, our support system … Though we have all accomplished much during our academic careers, as evidenced by our graduation today, it is important to recognize the help given to us by those who have gone before us. Isaac Newton once said that if he had seen further than others, it is because he had stood on the shoulders of giants. Indeed, we’ve had a lot of help along the way from close friends, coaches and teachers who have cared deeply about us.

But undoubtedly, the most important influence on my life has been my family. I won’t dwell on the fact that my older brother convinced me when I was younger that doing his chores for him would somehow build my character. Rather, my parents, who emigrated from India three decades ago, have worked hard to provide a good life for my brother and me. Their success instilled in me a strong dedication to my pursuits and an unshakable work ethic. They raised two God-fearing boys to believe that anything can be accomplished if it is backed by passion and commitment. And through my four years of eating at EVK [von KleinSmid Memorial Residence Hall], I have learned that mom’s cooking is always best. My brother – yes, the same one who tricked me into doing his chores – stood on this stage four years ago addressing his class and taught me to pursue my goals regardless of the circumstances. Undoubtedly, we have all had family, friends, mentors and teachers whose guidance has helped us to be here.

Second, helping others … Just as those before me have helped me succeed, I am here to help others become successful as well. My parents often remind me that success not shared is failure. This ethos of shared success has led me to my future career as a physician, and it has probably been the driving force in your lives as well. I cannot express how thankful I am that I became a Trojan. The same idea of sharing success with others is firmly entrenched in the USC spirit and has provided me with some of my proudest moments as a Trojan. No other university provides its students with such a high degree of support in proactively improving the campus and community. Through the various roles I have taken in improving people’s lives, I have learned that USC is not the University of Spoiled Children, but rather, the University of Service and Compassion. For example, after seeing the volunteer shortage at the LAC-USC hospital and with the encouragement of mentors, I co-founded the Collegiate Med Volunteers Program. The program, which started at USC, now has 150 volunteers from 17 different universities. Its success reflects the Trojan service-oriented philosophy. We Trojans are not satisfied by accomplishments that benefit only ourselves. Instead, we share our successes with those around us. We have all been given talents with which to help others. Once we leave the university, we should continue to share our successes with those around us in a way that benefits their lives.

And third, being there for the underprivileged … USC has taught me to fight for the underdogs – the misrepresented and the underrepresented. It is fitting that Sen. [John] McCain, a man who has dedicated his life to public service, will be addressing us in a few minutes. As an Indian-American, I know that Indians are often misrepresented. The media show us pictures of impoverished children living in the slums of Bombay. But how often do you see the real India, like the coconut groves of Kerala and the picturesque beaches of Tamil Nadu. Because I know how easy it is to be marginalized, I have striven, with USC’s help, to make my Indian heritage an important part of my life. Every year, I participate in the Indian Culture Show, to celebrate the beautiful Indian dances that are part of my ancestral roots.

Through this show that is presented to more than 2,000 guests, I feel that I am advocating for other Indian-Americans. We have all been a part of various culture shows or other events that celebrate the rich diversity of USC’s student body. Similarly, in our future lives, we will be able to understand and embrace our differences. In my future role as a physician, I hope to advocate for the rights of those individuals that are often overlooked – the medically uninsured. Through the support of the Trojan Family and its faculty, staff, and students, we have all become contributing society members. In the future, we should continue improving society by representing the underdogs.

With these three foundations, I am confident that USC has prepared us well for the future. Through your own reflection, I hope you have seen how your own life has been shaped over the past several years. After today’s commencement ceremonies, many of us will be going our separate ways. I, for one, still have not found a way to tell my parents that I am moving back home after graduation. Mom and Dad, are you listening? For most of us, today will be our last day within the safe environment of USC. We will begin working or furthering our education or pursuing some yet unknown path. Regardless of which route we follow, the skills we have learned at the University of Southern California have prepared us well to handle the future.

Congratulations to the Class of 2004. And always remember, always Fight On!