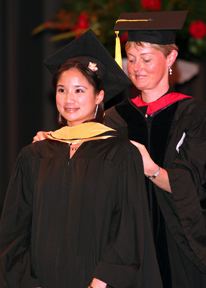 With the closing of another academic year, Keck School of Medicine of USC leaders are applauding educational gains made by students and efforts undertaken by faculty members in 2003-2004.

“I personally believe that our new curriculum is at the very forefront of medical education. I salute the students and the faculty on this tremendous accomplishment,”

The qualifications of entering students is just part of the story, however. Students who have spent the last few years at the Keck School learning under the new curriculum are demonstrating academic excellence.

Allan V. Abbott, associate dean for curriculum and continuing medical education, explained that the new curriculum is designed to enhance the understanding and clinical relevance of the basic sciences, as well as to improve students’ problem-solving and independent study skills. The new curriculum also is based on the use of real patient cases and increasingly incorporates small-group learning, directed self-study and new learning technologies.

Students also participate in a major new mentoring program, called Professionalism and the Practice of Medicine, in which meet weekly with senior faculty members to build professionalism and create a sense of collegial community; working in small groups, they address issues including communication skills, ethical judgment and the social and community contexts of health care.

After completing their first and second years under the new curriculum, third-year students achieved the school’s highest average scores on the United States Medical Licensing Examination (USMLE) Step 1 test. These students, who will graduate in spring 2005, were the first to go through the Keck School’s revised curriculum.

The National Board of Medical Examiners requires that medical students pass the USMLE’s three steps of tests to become practicing physicians in the U.S. and Canada. Students take the Step 1 test after their second year of medical school.

In addition, clinical faculty members reported that the third-year students were well-prepared for their required clinical clerkships.

“During the first three years of new curriculum implementation, the faculty has exhibited a remarkable dedication to the education of medical students despite other mounting pressures,” Abbott said.

He noted that as the Keck School strives to improve its standing in garnering medical research dollars, faculty members face mounting time demands to carry out research projects. At the same time, clinical faculty members have seen their practices become increasingly complex while clinical revenues decrease.

“It is a tribute to these faculty members that they have continued to find ample time and energy to devote to the enhancement of the educational process of our medical students,” he said.

Clive R. Taylor, senior associate dean for educational affairs and professor and chair of pathology, praised the role the Keck School Admissions Office has played in recruiting students and bringing top candidates to campus. “This has become a very active, rather than just a passive, process,” Taylor said.

In 2001, admissions officials developed a new strategy and goals for recruitment. They publish an attractive admissions viewbook, regularly visit the top undergraduate universities, build relationships with pre-medical advisors at the universities and hold information sessions for students over the summer, for example. In the past two years, they have made 30 visits to undergraduate schools and pre-medical fairs all over the country; in previous years, most visits were restricted to California.

They also mail personal letters and information packets to selected, highly qualified applicants at the beginning of each application cycle. In addition, they hold annual “accepted student receptions,” in which they invite accepted students to revisit campus, shadow faculty members in the clinics and labs and talk with Keck School students and faculty members.

Perhaps the greatest reflection of the campus’s educational mission lies within the experiences of the students themselves. Deborah Trujillo, who graduated with her Keck School classmates in commencement exercises on May 16, is one example.

She praised the commitment and caring of all of her teachers at the Keck School, especially Alexandra M. Levine, Distinguished Professor of Medicine, chief of hematology and Ronald H. Bloom Family Chair in Lymphoma at the Keck School of Medicine. “She is the best role model I can think of when it comes to a physician who will go completely out of her way in order to help,” Trujillo said. She noted that every one of her instructors has helped mold her medical future in some facet or form.

“We were once told very early on in our medical school careers that we would not appreciate our education until we left USC,” she said. “I cannot tell you how true a statement that really is … Yes, there are many educators that stand out above the others, but I enjoyed working with them all and know in whatever way, they all played a role in making me the doctor that I am going to become.”