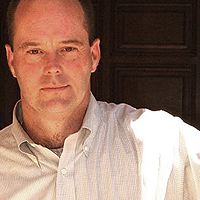 Keeping Mexican people – newer arrivals and long-standing Californians – visible but isolated in the burgeoning city came about through a discriminatory wage system, public segregation in schools and political and social exclusion, said USC College history professor William Deverell, author of “Whitewashed Adobe: The Rise of Los Angeles and the Remaking of its Mexican Past.”Photo/Cynthia Fox

Los Angeles has long been touted as a cultural crossroads, welcoming immigrants from around the world and across borders.

Yet a close look at the City of Angels shows it wasn’t always that way.

In his new book, “Whitewashed Adobe: The Rise of Los Angeles and the Remaking of its Mexican Past” (University of California Press, 2004), USC historian William Deverell explores Los Angeles’ roots back to the 1850s. He finds that the Los Angeles of the past was anything but inclusive, especially when it came to Mexican and Mexican American residents.

“Even though Los Angeles was once part of Mexico, the city came of age by cutting ties with Mexican places and people,” said Deverell, who began his appointment in the USC College of Letters, Arts and Sciences in July.

“Throughout the early years of California statehood, there was a very troubled relationship between the growing city of Los Angeles and Mexicans and Mexican-Americans.”

That trouble accelerated in the bloody years of the 1850s, just after the conclusion of the Mexican-American War, and continued well into the 20th century as the modern metropolis � built largely by Mexican laborers � arose.

Throughout time, the goal was to keep Mexican people � newer arrivals as well as long-standing Californians � visible but isolated on the landscapes of the burgeoning city, Deverell said. This came about through a discriminatory wage system, public segregation in schools and political and social exclusion.

Deverell chronicles several developments in Los Angeles history that played a role, including the cementing of the Los Angeles River; the 1924 outbreak of bubonic plague; the evolution of America’s largest brickyard; and the presentation of the famed Mission Play, a drama tied to regional assumptions about history, progress and ethnicity.

Deverell said an example of how city leaders separated Mexicans � literally and figuratively � from other Angelenos is found in the decision to fill the Los Angeles River with concrete.

“Proximity to the river had long been one marker of Mexican Los Angeles,” Deverell said. “The river bounded and separated neighborhoods from the commercial districts of downtown. Concrete and fencing drove the point home.”

But despite their efforts to create separations, city leaders weren’t shy about capitalizing on Los Angeles’ Mexican culture for commercial or economic purposes. When the city’s business interests were looking to establish an urban identity, they borrowed Mexican cultural traditions and put on a carnival called La Fiesta de Los Angeles.

Deverell’s goal is to show how the establishment of Los Angeles is intertwined with its relationship to � and denial of � Mexican culture.

“What I am most interested in are the ways in which proximity to Mexican people, to Mexico itself and to a recent Mexican past both troubled and intrigued Anglo-American arrivals and new settlers in the region,” he said.

“That closeness, and even intimacy, created opportunities for exploitation and patterns of cultural appropriation that are critical to understanding both how Los Angeles grew and how the city’s sense of itself matured,” Deverell said.

Deverell came up with the idea of chronicling the rise of Los Angeles through shifting ideas of race and ethnicity about a decade ago.

“I decided to write the book because the rise of Los Angeles is such a fascinating topic and because the city’s ethnic history is equally fascinating, if disconcerting. I wanted to put the two themes together.”

“Whitewashed Adobe” uncovers an urban identity � and the power structure that fostered it. Los Angeles’ history of racial exclusion has implications for how the future of Los Angeles will continue to be shaped, Deverell said.

“If the city of the future is to work at all, we must look closely at how patterns of exclusion, segregation and cultural appropriation were established and sustained,” he said. “Then we have to work together to make sure that they no longer function.”

Charting ‘The Rise of Los Angeles’