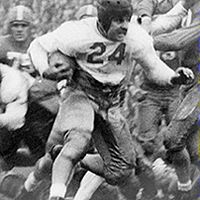 Ambrose Schindler charges down the field for the 1939 champions.

USC will salute the surviving members of that 1939 squad at its Oct. 16 home game against Arizona State.

“It was brought to our attention by various individuals that we should be claiming the 1939 Trojans among our national champions in football,” Garrett said. “We took this matter seriously, did significant research and determined this to be true. That 1939 team was one of the greatest in our history.

“In fact, its coach, the legendary Howard Jones, acknowledged as much when at the team banquet that year he said this squad was his finest ever at USC, at least in terms of depth,” Garrett said.

The 1939 Trojans were presented with the Knute Rockne Intercollegiate Memorial Trophy, at the time emblematic of the nation’s No. 1 team.

The trophy (originally called the Rissman National Trophy) was given to the team that finished atop the Dickinson System, a mathematical point formula devised by Illinois economics professor and nationally respected football analyst Frank G. Dickinson. His system crowned a national champion from 1926 to 1940 (with predated rankings in 1924 and 1925).

The Dickinson System was the first to gain widespread national public and media acceptance as a “major selector,” according to the NCAA Football Records Book (the Associated Press poll didn’t begin until 1936).

Dickinson claimed that in 1939 “the Trojans were the best team in the best section … and the nation’s other top teams did not play as strong a schedule as USC.”

In 1939, there were 13 polls and systems that chose a national champion. Texas A&M (in 10) and Cornell (in 2) finished first in the others that season.

USC claimed its first national championship in football in 1928, when � as in 1939 � it was named only by the Dickinson System (Georgia Tech and Detroit were picked No. 1 by that season’s eight other selectors). Yet for reasons unknown, USC never acknowledged 1939 among its national titlists � until now.

There were five other years (1929, 1933, 1976, 1979 and 2002) in which the Trojans finished atop at least one poll, but USC does not consider the selectors in those years as being all-encompassing enough at the time to claim a national championship.

The NCAA does not conduct a national championship in Division I football and is not involved in the selection process. Over the years, there have been nearly 30 selectors of national champions using polls, historical research and mathematical rating systems.

Stanford (in 1926), Michigan (in 1932) and SMU (in 1935) claim a football national championship after being selected almost solely by the Dickinson System.