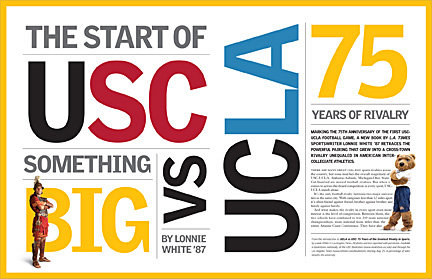 From the introduction to UCLA vs USC: 75 Years of the Greatest Rivalry in Sports, by Lonnie White ’86, a former USC football player and later a staff reporter of the Los Angeles Times. All photos and text reprinted with permission. Available in bookstores nationally, including the USC Bookstore.

There are many great college sports rivalries across the country, but none matches the overall magnitude of USC-UCLA. Alabama-Auburn, Michigan-Ohio State, Cal-Stanford are storied football rivalries. But when it comes to across-the-board competition in every sport, USC-UCLA stands alone.

It’s the only football rivalry between two major universities in the same city. With campuses less than 12 miles apart, it’s often friend against friend, brother against brother and family against family.

And what makes the rivalry in every sport even more intense is the level of competition. Between them, the two schools have combined to win 219 team national championships, more national team titles than the entire Atlantic Coast Conference. They have also produced 732 Olympians (392 from UCLA and 340 from USC) who have won a total of 412 medals, more than Canada and Mexico combined.

As former UCLA football coach Red Sanders said, playing USC is not a matter of life or death, “it’s more important than that.”

I got my first glimpse of the rivalry over the Thanksgiving holiday in 1972. I was 8, and I became mesmerized while watching television in my New Jersey home.

USC was playing UCLA in a football game at the Memorial Coliseum. Outside my house, it was dark, rainy and cold, a miserable, drab East Coast night. But on television, the sun shone brightly before the early-evening game in L.A., fans in vibrant colors filled the stadium. Cardinal and gold on one side. Blue and gold on the other. I felt as though I were sitting inside the Coliseum that night.

I got chills every time USC’s Anthony Davis touched the ball. But I also liked the wishbone offense UCLA Coach Pepper Rodgers ran with Mark Harmon at quarterback. Plus, I thought the Bruins’ white cleats were really cool.

In the end, I found myself rooting for Coach John McKay’s Trojans, who won, 24-7, to clinch a Rose Bowl berth. The reason? The horse, of course.

I was sold after watching Traveler gallop around the Coliseum field after every USC touchdown. That night, I announced to my mother that I was going to college at USC.

That feeling lasted about four months.

In March, I was captivated by a basketball game on television. The championship game of the 1973 NCAA tournament featured UCLA, going for its seventh consecutive national title, against Memphis State.

Earlier in the day, I had gotten into a debate with a couple of my recreational basketball teammates. They liked Memphis State because of Larry Finch and Larry Kenon. I rooted for UCLA because of Coach John Wooden and Bill Walton.

That night, Walton was unstoppable. He set NCAA championship game records by making 21 of 22 field goals and scoring 44 points to lead UCLA to an 87-66 victory.

My teammates were silent the next day at practice. That night, I told my mother I had a new plan. I was going to UCLA.

Four years later, I met the rivalry in person.

My older brother, Timmy [White ’82], was a multi-sport high school athlete who was recruited by nearly every college football powerhouse in the country, including USC and UCLA.

On one winter day in 1977, coaches from USC and UCLA were in our neighborhood looking to talk to my brother. For me, it was a great experience to meet John Robinson and Terry Donahue.

After taking two recruiting trips to visit the campuses of both schools, my brother decided to attend USC the next year. I eventually followed in his footsteps and played football at USC from 1982 to 1986. As an alumnus, my loyalties have been with the Trojans. But I have always had a genuine respect for UCLA and consider the rivalry a wonderful part of my life, because these are two excellent schools with storied programs often competing at the highest levels possible. And it’s a rivalry that has been growing for nearly nine decades.

Its roots date to 1919, when UCLA was established as the University of California, Southern Branch, with its campus on Vermont Avenue.

At that time USC, founded in 1880, played against such schools as Occidental, Pomona and occasionally UC Berkeley. Though some were concerned about … a new rival in Los Angeles, USC welcomed Southern Branch, at least in the beginning.

The two schools met for the first time in a major sport in the spring of 1920 when the Southern Branch Cubs knocked off the Trojans’ highly regarded baseball squad, 7-6, in a spirited game at Exposition Park.

Then, before any rivalry could take hold, USC put an end to it. Eager to retain its sports dominance in Los Angeles, USC partisans realized that playing a new school in L.A. was a no-win situation for USC. According to this calculus, the Trojans would gain nothing from beating the Southern Branch, because these victories would be expected, and any losses would only enhance the upstart school’s reputation at the expense of the Trojans. So USC’s faculty members decided to ban all competition in major sports against the Southern Branch.

For the next seven years, the Trojans and Southern Branch athletic teams went their separate ways until USC was essentially forced into changing its position to accommodate the fast-growing state school.

In 1927, the Southern Branch began building its campus in Westwood and changed its name to the University of California at Los Angeles. After several strong seasons winning a variety of titles in the Southern Conference, UCLA was invited to join the more prestigious Pacific Coast Conference, forerunner of the current Pacific-10, creating a rivalry with USC whether the Trojans wanted one or not.

During the time USC refused to play UCLA, the Trojans grew into national powers in track and field under Coach Dean Cromwell and football under Coach Howard Jones. That’s why the Trojans felt that they were more than ready when UCLA officially became a conference rival in January 1928.

The following month, the first of a three-game basketball series at the Olympic Auditorium officially became the first competition between the schools as they are now known. USC was the heavy favorite going into the game and won 45-35 in front of a record-setting crowd of about 9,000. But five days later, UCLA came roaring back with a 34-27 win, and two days after that, the Bruins took the third game of the series

The Start of Something Big: USC vs. UCLA