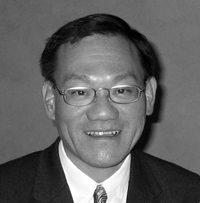 The enigmatic-but-common condition known as irritable bowel syndrome, or IBS, is caused by an overgrowth of bacteria in the small intestine, proposes a Keck School of Medicine researcher in the Journal of the American Medical Association.

Researchers have suggested numerous theories to explain IBS, which affects as many as 36 million Americans. But according to gastrointestinal motility specialist Henry C. Lin, associate professor of medicine, the idea of a bacterial origin for IBS represents a major change in thinking.

Writing in the Aug. 18 issue of JAMA, Lin proposes that ordinary bacteria normally confined to the large intestine may expand into the small intestine, prompting uncomfortable bloating and gas after meals and changes in bowel movements. Bacteria might also raise an immune response, which may explain the flu-like illness (including such debilitating symptoms as headaches, and muscle and joint pains and chronic fatigue) so common in IBS patients.

“IBS has long been a frustrating diagnosis for both patients and their physicians. The bacterial hypothesis of IBS offers new hope for suffering patients by providing a new framework for understanding the symptoms of this disorder and by pointing to new strategies for treatment,” Lin said.

Physicians frequently diagnose a patient with IBS when ongoing symptoms, including diarrhea, constipation, bloating, gas and abdominal pain, are not explained by medical tests such as gastrointestinal endoscopies.

For more than a dozen years, Lin has searched for a common thread to account for the symptoms in IBS.

Studies indicate 92 percent of IBS patients report bloating after they eat, a symptom he saw again and again in his patients. While many physicians believe that IBS-related bloating is perceived and not real, Lin notes that recent studies of IBS patients show that their abdomens do become measurably more distended than those of healthy patients.

With the symptom of post-meal bloating in mind, Lin began the quest for the cause of IBS.

He considered the issue of increased intestinal gas. Gas comes about when gut bacteria ferment food in the intestinal tract. There are plenty of organisms in the gut, where bacteria may number 100 trillion.

Bacteria perform a variety of valuable services in the large intestine. “But we believe problems may start when bacteria set up shop in the small intestine where they are normally scarce,” Lin said. “Usual medical tests such as endoscopy cannot detect this problem in most patients.”

However, a breath test can be used to indirectly tell if too many bacteria are in the small intestine. In this test, the patient ingests a syrup containing the sugar lactulose. Over the next three hours, the gaseous products of bacterial fermentation of this sugar may be measured in the exhaled breath.

In a 2003 paper authored by Lin and his research partner Mark Pimentel, of Cedars-Sinai Medical Center, 84 percent of IBS patients were found to have abnormal breath test results suggesting small intestinal bacterial overgrowth.

In this double-blind, placebo-controlled study, patients received either antibiotic therapy or a sugar pill. Patients whose small intestinal bacterial overgrowth was eradicated by antibiotics reported their symptoms improved by 75 percent.

Small intestinal bacterial overgrowth allows gut bacteria to cross the mucosal barrier�or lining of the gut�and enter the body. This activates the patient’s immune system, as evidenced by increased numbers of inflammatory cells in tissues of IBS patients, Lin said.

“The immune response to bacterial antigens may then explain the flu-like symptoms, such as chronic fatigue and pain, that can greatly diminish the quality of life,” Lin said.

Lin sees the bacterial hypothesis as a promising beginning that can accelerate the pace of discovery by future researchers. This may be encouraging and hopeful news for the millions of people suffering with IBS, Lin said.

The Jill and Tom Barad Family Fund supports Lin’s current bacterial overgrowth research. His other research projects are supported by the National Institutes of Health.