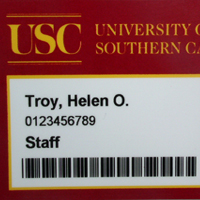 Under the new system, a single ID number will belong to only one person across his or her university career.

All university employees will soon be issued new identification numbers that will be more user-friendly among the university’s data systems.

The new ID numbers will be used for a person’s entire USC “life span,” said Margaret Harrington, director of the Office for Organization Improvement Services.

A 19-member Cost and Service Task Force has been working on the changeover for two years. Several factors went into the process to reorganize the number system, Harrington said.

“Security was a major factor,” she said, “and the new system enables us to assign unique numbers so we can keep Social Security numbers in the background.”

In addition, she said, database information will be shared across key central systems that have often been a challenge to integrate.

In the past, the same 7-digit number has sometimes been assigned both to a student and to an employee, Harrington said. Under the new system, a single ID number will belong to only one person across his or her university career.

In November, ID numbers will be sent to home department coordinators, and faculty and staff will be able to look up their new USC ID numbers on the university’s eTrac system.

Faculty and staff will also get new USCards with the 10-digit ID number printed on the card face, said Brenda De Long, director of USCard Services.

“Exchanging your old card for the new one will be easy,” De Long said. “USCard will be scheduling visits by a “mobile team” over the next six months to produce new cards at a site near employees.”

The idea, De Long said, is to make it convenient for emplyees to obtain new ID cards. Senior business officers and home department coordinators will assist USCCard with scheduling, which is slated to begin early in November.

“The student card has Tommy Trojan on the left-hand side of the card,” De Long said. “Employee cards identify us as staff or faculty and will contain a barcode.”

De Long said the card design � with the cardinal border and university name and logo across the top � will not change. The barcode on the front of the card takes the place of the sticker USC library patrons were required to have.

De Long, who suggested that old cards be turned in, saidfaculty and staff will not be charged for the new 10-digit cards. Photos on the cards will be updated, unless they were taken within the last year for new employees.

New cards will continue to be issued from December through May, 2005, which is also the timeframe for the continuation of the transition of forms and processes that will use the new ID numbers.

All faculty and staff are encouraged to replace current USCards over the coming academic year, Harrington said.

It’s up to individual departments to decide if they want part-time faculty to receive identification cards, Harrington said. Some schools issue cards for part-time faculty or lecturers who may need them to access certain facilities, she said.

Under the new system, if someone leaves the university, either as a graduating student or an employee or faculty member who goes elsewhere, the USC ID number remains associated with his or her record as an alumnus or former employee.

If the person reenters the system in another role (such as a graduate returning as an employee), he or she will be assigned the same 10-digit number they previously had.

New students were issued USC ID numbers during orientation; continuing students have been assigned new numbers and have received instructions on how to turn in their old USCards.

The complete changeover of data is a work-in-progress, said Harrington, who noted that she and others are continuing to work on ways to safeguard employee information.

One way is to store the information so that it can be given out only in particular ways. For instance, a person may want a home telephone number to be available to colleagues in a home department, but not to others.

“That’s the kind of feature that we might be able tocustomize,” Harrington said.

Eventually, Harrington said, the old ID cards will cease to be effective in applications where a card must be scanned. She said a deadline will be set, but not during this academic year.

For more information about the university ID number program, contact Harrington at harringt@usc.edu.

If you have questions about your USCard, or upcoming carding events, email USCard at USCard@usc.edu or call (213) 740-1030.

New ID Numbers Will Be Issued to USC Employees