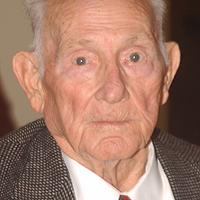 The award was presented to Hall in November by Elizabeth Redmon, executive director of the Emeriti Center.

Redmon noted that Hall’s career as a professor of physical education and USC’s Grand Marshall of 27 years were “outstanding contributions to the life of this university.”

But the Leibovitz Award, she reminded the audience, is given for service after retirement.

Tillman returned to USC to head the Emeriti Center from 1989 to 1996, formed the Retired Faculty/Staff Benefits Committee, began the project of video-taping interviews with influential retirees and established the USC Emeriti College with its offering of lectures to the Los Angeles community.

“Tilly’s real vision came from the recognition that retirees best serve themselves by serving others,” Redmon said.

“Tilly became an expert on successful aging, and at 90 and beyond, until recent strokes, he was out offering 14 different lectures on aging.”

Hall’s granddaughter, Michele Jones, accepted the award for her grandfather. Jones said Hall has continued to work on “understanding the process of aging and preventing the debilitating effects of aging to the extent possible, and then living with dignity and purpose.”

“He has received many awards in his career,” Jones said, “but none has ever meant more to him than this one, which is … awarded by his fellow faculty members.”

Martin L. Levine, UPS Foundation Chair of Law and Gerontology and Vice Provost for Faculty Affairs, said, “A large part of USC’s institutional memory is represented by people in this room.

“We hope each of you will find continued opportunities, and continue to teach and to mentor students.”

Redmon presented each new emeritus faculty with a copy of “Trojan Gallery,” a pictorial history of the university from its beginning to 1980.

The annual presentation of the award is co-sponsored by the Office of the Provost, the Retired Faculty Association and the USC Emeriti Center to honor faculty members who retired during the past academic year.

For more about the Emeriti Center and the Retired Faculty Association, visit https://www.usc.edu/org/emeriti_center/.