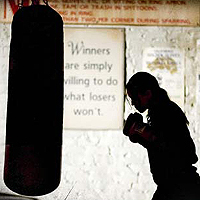 The writers of “Million Dollar Baby” are winners of the 17th annual USC Scripter Award, honoring both the author and screenwriter of the year’s best film adaptation of a book or short story.

“ ‘Rope Burns’ represents some of the best writing ever done about boxing, and Paul Haggis has adapted it with intelligence, passion and great deftness. This graceful marriage of source and screenplay is precisely what the Scripter Award was created to honor.”

Actor and producer Henry Winkler will serve as master of ceremonies, and Hal Kanter will return as grand emcee.

“Million Dollar Baby” explores the relationship between a professional boxing trainer and a smalltown woman seeking a new life through her sport. The story and film explore the surrogate father-daughter relationship that ensues and the tragic outcome that changes their lives.

Eastwood also earned a Directors Guild nomination, and the film has earned a best picture nomination from the Producers Guild of America.
The late F.X. Toole � aka Jerry Boyd � was 70 when “Rope Burns: Stories From the Corner,” a book about his long career as a boxing “cut man” and manager, was published.

Hosted by the Friends of the USC Libraries, the USC Scripter Award is given annually to authors and screenwriters for the best adaptation of an English-language film based on a book or short story.