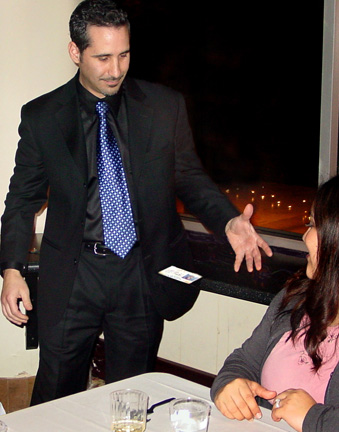 Magician David Minkin floats a spectator’s driver’s license in midair as part of the tsunami relief show sponsored by students at the Keck School of Medicine.

Keck School of Medicine students raised more than $7,000 for tsunami relief efforts through their Jan. 20 magic show and dinner, and now are launching a new campaign they hope will raise another $8,000.

Nine magicians from the Magic Castle performed at the show, held at Mayer Auditorium. About 200 students, faculty members and others attended the “Magic Relief” show, while 50 diners took part in a catered, pre-show dinner.

Money raised went to the nonprofit groups UNICEF and CARE, which are helping children and families in Indian Ocean coastal nations devastated by the Dec. 26 earthquake and subsequent tsunami.

Second-year Keck School student Sumit Dua came up with the idea of staging the magic show when he saw the devastation wreaked by the tsunami, and felt compelled to act.

“I’ve done big shows like this before, so why not do it here to raise money for relief?” said Dua, who had worked professionally as a magician before enrolling at the Keck School.

Now the students are back for more.

“Our first event went so well, we decided to create another fundraiser,” said Dua, a native of India who now lives in Walnut, Calif. “We’re calling it ‘The Challenge.’”

To kick off The Challenge, Keck School student Deborah Kimball (who also worked on the tsunami relief magic show) volunteered to donate $1,000 for relief, in honor of her grandmother, who recently passed away. But she made her gift a challenge grant to fellow students: She will match other students’ donations, up to $1,000.

Dua noted that Kimball and fellow second-year students Sheila Vasan and Julie Kang and first-year student Pho Nguyen have been instrumental in the successful fund-raising efforts.

Anyone wishing to contribute may contact Dua at (626) 272-1055 or send an e-mail to KeckTsunamiRelief@yahoo.com. Checks may be made out to UNICEF or CARE. Students also have information on donation via credit cards on their Web site http://relief.gotmedbooks.com.