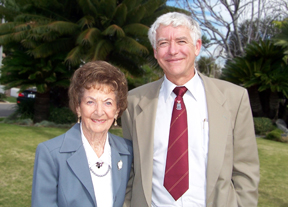 Henrietta C. Lee, a longtime benefactor of the USC/Norris Comprehensive Cancer Center, has made a new gift of $15 million to establish the Henrietta C. Lee and Harold E. Lee Women’s Health Center.

Lee’s gift will fund the center, to be housed on the third or fourth floor of the USC/Norris Cancer Center. The gift also will be used to recruit researchers and clinicians focused on women’s cancers, with emphasis in breast and ovarian cancers.

In 2002, Lee gave an additional $5 million to enable the Lee Breast Center to expand its emphasis to include research and treatment of ovarian diseases.

The center was renamed the Harold E. and Henrietta C. Lee Breast and Ovarian Center to recognize the expansion of its mission.

“Mrs. Lee has taken a remarkable personal interest in the Lee Breast and Ovarian Center,” said Peter Jones, director of USC/Norris, “That personal interest is matched by unbelievable generosity. As we thanked her, she in return thanked us more than once for giving her the opportunity to participate” in the fight against cancer.

Jones said that Lee commented she was partly motivated by seeing the benefits of her previous gifts, “especially in seeing what the breast center has become and what it has meant to women and their families.”

Press said that Lee’s generosity “has had a huge impact on the quality of our patient care services and on our research programs in women’s cancers. We appreciate her continued commitment to this area of women’s health and to the USC/Norris Cancer Center.”

To date, Lee has given more than $25 million to fund research and clinical activities at USC/Norris.

Lee was born outside of Amsterdam and moved to the U.S. with her family at the age of 15, settling in Long Beach. She grew up working at her father’s dairy in Cypress, milking and feeding cows and helping with the business.

After her husband’s death in 1990 and her niece’s subsequent fight against cancer, Henrietta Lee had a growing desire to help fight the disease.

She began with two $5,000 donations to USC�where a physician had referred her niece for cancer treatment�to help people afflicted by cancer, she said, but she wanted to do more. “I wanted to be involved in fighting cancer,” she said. And the Harold E. and Henrietta C. Lee Breast Center was born.

Most of her previous work in supporting health care and medicine was in Orange County, she said. She has served as treasurer for an annual golf tournament at Los Coyotes Country Club benefiting Children’s Hospital of Orange County.

In 2001, nearly 600 people paid tribute to Lee and surgeon Melvin J. Silverstein at the prestigious Norman Topping Dinner sponsored by the USC/Norris Cancer Research Associates. The honorees were joined at the black-tie dinner by actress Barbara Eden, former network medical correspondent Art Ulene and USC President Steven B. Sample. The event raised more than $1 million for USC/Norris, most of which advanced construction of the Harlyne J. Norris Research Tower.