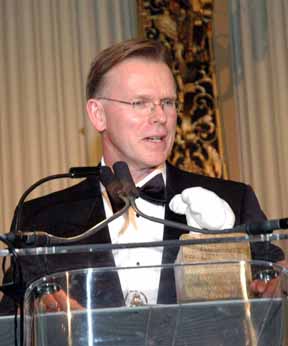 The American Heart Association honored USC cardiothoracic surgeon Vaughn Starnes on Feb. 12 at its 28th Annual Los Angeles Heart Ball at the Millennium Biltmore Hotel in downtown Los Angeles. Starnes is Hastings Professor of Surgery and chair of the Department of Cardiothoracic Surgery at the Keck School of Medicine.

The Los Angeles County Heart Ball is the largest event in the association’s Western States Affiliate, and ranks in the national American Heart Association’s top 10 heart balls. It brought together more than 400 prominent business leaders in Los Angeles County and featured a live and silent auction, dining and entertainment by Christina and Antonio Castillo de la Gala, a piano-soprano duet.

This year’s event raised more than $400,000 to support the fight against heart disease and stroke, the nation’s number-one and number-three killers, respectively.

“I can’t imagine a better way to celebrate Valentine’s Day than toasting to a healthy heart,” said Peter D. Kelly, III, board president of the American Heart Association, Los Angeles County Division. “The event was a big success thanks to the contributions of our many sponsors.”

Starnes arrived at USC in 1992 to head the then-division of cardiothoracic surgery in the Department of Surgery. Since that time, cardiothoracic clinical and research efforts have grown more than four-fold.

In his first year, USC cardiothoracic surgeons performed 500 procedures. The number today is in the thousands.

Their research efforts have attracted millions of dollars in grant funding, and their pediatric surgery innovations at Childrens Hospital Los Angeles have captured the attention of surgeons all over the world.

Being honored at this year’s Heart Ball along with Starnes were William A. Burke, president of the Los Angeles Marathon, and Alfredo Trento, chair of the division of cardiothoracic surgery at Cedars-Sinai Medical Center.