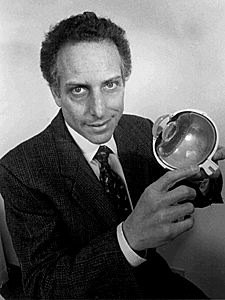 Steven E. Feldon, with a model of the human eye.

Ophthalmologists are being warned to stop performing a common surgical procedure used to treat patients suffering from non-arteritic, anterior, ischemic optic neuropathy, because the surgery does no good and may actually do harm.

These are the findings from a national trial that involved a research team at the Doheny Eye Institute.

The study, sponsored by the National Eye Institute of the National Institutes of Health and released in the Journal of the American Medical Association, found that patients who underwent the operation fared no better and perhaps worse than those who did not. People who went untreated recovered their vision by six months after diagnosis, and actually regained their sight more frequently than the surgical group.

Non-arteritic, anterior, ischemic optic neuropathy strikes approximately 8,000 Americans each year – most of them over age 60.

Of the 244 participants enrolled in the study around the United States, 199 had the surgery and 125 did not receive any specific therapy. An independent committee overseeing the safety of the study met last October and ordered the program halted based on the six-month follow-up data.

“Currently, there is no effective treatment for this condition,” said Steven E. Feldon, professor of ophthalmology and neurological surgery and head of the USC research team.

Non-arteritic, anterior ischemic, optic neuropathy occurs very suddenly and often affects only one eye. Approximately 40 percent of sufferers develop it in both eyes. The cause is unknown, but researchers suspect an interruption of blood flow to the optic nerve to be the underlying problem.

The operation – called optic-nerve decompression surgery – temporarily detaches an eye muscle to reach the optic nerve just behind the eye. Two small slits are made in the fibrous sheath surrounding the nerve, allowing cerebrospinal fluid to escape, thereby lessening the pressure.

The practice was adopted in 1989 following the release of a study of 14 patients who had undergone the procedure at the Wills Eye Hospital, in Philadelphia.