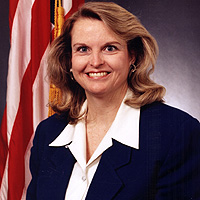 Throughout her career, Aileen Adams has brought people together to solve problems. And that’s exactly what she will be doing in her new role as USC’s vice provost for strategic alliances.

Among her responsibilities will be advising the provost on opportunities for significant partnerships with all levels of government, the private sector and community organizations to address problems of major social importance.

“My passion is partnerships,” said Adams, who was appointed vice provost late last year. “Wherever I’ve worked, I’ve tried to develop alliances on a local, statewide or international level to accomplish reforms.”

Another critical aspect of her position will be to work with the provost to implement portions of USC’s new strategic plan, ensuring that students and community groups have input on how the university executes its roadmap for the future, for example.

“I’m delighted that Adams will be assisting the provost’s office in developing stronger ties to the many diverse groups and departments involved in building an even stronger university,” said USC Provost Lloyd Armstrong, Jr. “She will be instrumental in helping us implement the many innovative aspects of our new strategic plan.”

Adams already has accomplished a major initiative. She and Richard Drobnick, vice provost for international affairs, have brought together USC faculty and administrators who are working on tsunami relief efforts and developed a grant program that will provide funding from the Provost’s Office for eight relief projects.

One of the projects Adams is working on is promoting Los Angeles and the university as cultural destinations. She is putting together a program to encourage students to become more involved in Los Angeles’ cultural activities and facilitating interactions between USC and the city’s cultural organizations. These partnerships will be mutually beneficial as resources are shared and alliances are strengthened, she said.

Adams has had extensive executive experience in all levels of government and has pioneered several innovative, interdisciplinary programs. She currently chairs the Women’s Foundation of California, which provides comprehensive support for hundreds of programs benefiting poor women and girls throughout the state.

From 1999-2003, she served in the governor’s cabinet as secretary of the State and Consumer Services Agency, overseeing 12 state departments, a budget of $1.1 billion and 15,000 employees in areas ranging from civil rights enforcement to state building projects and consumer protection.

From 1994-97, Adams was a presidential appointee in the U.S. Justice Department where she headed the Office for Victims of Crime and served as the nation’s chief advocate for crime victims’ rights and services.

She has also worked as the president of the Los Angeles City Fire Commission and as a city prosecutor and city police reserve officer.

Adams is a graduate of Howard University Law School and Smith College, which honored her as its outstanding alumna. She has been a member of the Trojan Family for many years as the wife of USC Annenberg School for Communication Dean Geoffrey Cowan.

Setting Out to Solve Problems