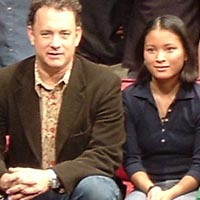 Tom Hanks and a student volunteer on the set of “CU@USC.”

USC’s Trojan Vision television station will make history on Friday, April 22, when it runs its 1,000th episode of “CU@USC,” a half-hour talk show that has drawn guests such as Tom Hanks, George Lucas and Steven Spielberg.

The milestone program, featuring a special retrospective on the show’s history and guests, will be carried that evening at 6 p.m. simultaneously on LA36 and USC cable system channel 8.

“One thousand shows is phenomenal for the regular television industry, but when you consider that Trojan Vision is run entirely by student volunteers, the achievement speaks volumes about their dedication,” said Elizabeth Daley, dean of the USC School of Cinema-Television and executive director of the USC Annenberg Center for Communication, which funds Trojan Vision.

“Each fall the station attracts more than 250 students from all sorts of majors � not just cinema and communications � but music, engineering, philosophy and more,” said Don Tillman, Trojan Vision executive director and adviser to the students. “They arrive bringing something new to the mix, and they leave with hands-on experience that will serve them professionally in and beyond the industry.”

Produced since 1997, “CU@USC” runs live five nights a week and features guests from all arenas, including politics, entertainment and academia.

“The ‘CU@USC’ experience is intense,” said Elizabeth Newman, the show’s executive producer and a senior in the USC Annenberg School for Communication. “Here we are, a bunch of students who have nothing in common when the semester begins, but within a few weeks we’re doing a program featuring people we never dreamed we’d meet, let alone work with.”

Based in the Robert Zemeckis Center for Digital Arts, Trojan Vision carries a full array of programming that includes sports, news and entertainment.

Trojans Vision’s signal goes out to more than 1.8 million households every evening via Los Angeles City Cable channel 36 and to the USC community via USC cable channel 8. The station also streams on the Internet 24/7.