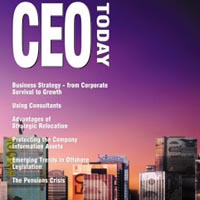 The survey, which USC researchers have conducted annually for the last decade, monitors the main changes taking place in boardrooms.

Corporate directors are exerting more influence in the boardroom and have greater independence, according to a new study by the USC Marshall School of Business’ Center for Effective Organizations and Mercer Delta Consulting, a global management consulting firm based in New York.

The study found that:

� 93 percent of directors surveyed felt their board was independent of management “to a great” or “very great extent”;

� 95 percent said board members voice opinions that conflict with the CEO’s view;

� 73 percent said CEOs have less control over their boards “to some extent” or to a “great or very great extent”; and

� 92 percent of directors indicated that they had influence over the meeting agenda.

Despite this shift, directors were positive overall regarding the dynamics in the boardroom and their ability to work effectively with management:

� 92 percent said that the board works well with senior management;

� 95 percent reported boards receive sufficient information to carry out their responsibilities; and

� 96 percent indicated that the CEO keeps the board informed about significant matters affecting the company.

The findings of the study are based on responses from 221 directors of Fortune 1000 companies in the United States (average revenue $9.9 billion). The survey, which USC researchers have conducted annually for the last decade, monitors the main changes taking place in boardrooms.

“The past year was a crucial milestone in terms of the practical application of the governance reforms put forth in 2002,” said David Nadler, chairman of Mercer Delta Consulting.

“These results reflect our own experience with boards, which is that many of them are not only doing the hard work to change their structures and comply with governance requirements, they are going beyond basic compliance and striving for optimal board effectiveness.

“What is also notable is that the changes underway have had a significant impact on boardroom dynamics, but that the board and management continue to work well together in the majority of cases,” Nadler said.

“The best CEOs have recognized that they must thoughtfully engage and lead their newly independent boards, and they are seeing themselves as partners with the board in the governance process.”

While the results reflected significant progress in the boardroom, some issues still require attention. Of note, one third of directors do not rate themselves as effective or very effective in key roles such as planning for CEO succession (31 percent) and shaping the long-term strategy of the company (36 percent).

“The past year has highlighted the absolutely critical need for boards to plan carefully for CEO succession,” Nadler said. “It is a point of concern that one third of the directors of our largest companies do not feel they are adequately planning for the future leadership of the corporation, thereby exposing the company and its shareholders to considerable risk in the event of an unexpected CEO departure.”

In terms of shaping long-term strategy, 80 percent of directors reported that their boards were spending more time on monitoring and less on strategy to some or to a great extent.

“This finding suggests that directors are distracted from critical areas such as succession planning and strategy by their focus on compliance and monitoring,” Nadler said. “The challenge ahead is for boards to engage more fully and effectively in these key areas.”