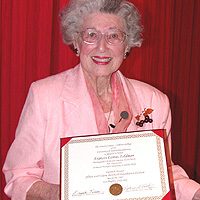 Feldman said she felt privileged to present this year’s lecture.

“A Borchard lecturer exemplifies a lifetime of scholarly production of the highest order,” said Elizabeth Redmon, executive director of the USC Emeriti Center.

Feldman’s lecture, titled “A Natural Optimist Grows Up in Los Angeles,” was delivered before an audience of colleagues, students, family and friends at the USC Leonard Davis School of Gerontology in March.

Feldman said she felt privileged to be chosen to present this year’s lecture. “Especially since I’ve had such fun all my life,” she said. “You don’t expect to be rewarded for that.”

“No matter how hard I try, words are not adequate to describe the remarkable connection Dr. Feldman has with the academy, USC and the Los Angeles community,” said William R. Faith, director of the Emeriti College. “As her lecture title suggests, she is a part of the maturing of the university and of the city of Los Angeles.”

In her lecture, Feldman provided a personal perspective as a resident of Los Angeles for more than eight decades, calling it a “bouillabaisse of recollections.”

She told how her family came to the city in 1921, drawn by boxes of fruit and nuts that her uncle sent to entice her asthmatic father to move to the area.

By the time she was 15, she saw the city’s population expand and its neighborhoods change. She was editor of the school newspaper at her junior high school, “that same James Foshay Middle School with which USC has a close relationship today � I had been in the first class that entered.”

She and a friend climbed a fire escape at the Biltmore Hotel and managed to get an interview with President and Mrs. Coolidge for “a message for the school children of Los Angeles.

“I often have thought about how different is the protection given presidents today,” she added, “as is our concern about how and where children travel unescorted.”

Feldman reflected on her student days at USC and how she had been accepted into its medical school, but when she applied for a job as a social worker to earn money for tuition, she knew she had found her calling.

She said her contact with families in desperate need following the Great Depression “led me into my first major research: namely, the social and psychological meanings of money and work in family life.”

She went on to do research on women in the workplace, family finances, adoption procedures, day care and relief (now known as welfare) and many other avenues of social human services.

She remains optimistic about the future of Los Angeles and believes that answers will be found for the problems still hindering society, such as lack of healthcare coverage for millions, mental illness and assistance for the frail, the elderly and those in need.

“The first three streets in the new city of Los Angeles were Faith, Hope, and Charity,” she said. “Charity is now Spring Street; Faith is now Flower Street; and we still have Hope!”

Feldman retired in 1982, but since then has spent her time consulting, giving workshops and lectures, and writing on social issues.

Feldman’s essay described the social problems confronting the city at that time, including immigration issues, lack of health care and unemployment that led to racial tension.

Over the years, Feldman has shared her expertise with numerous university committees, and she continues to be active and retains an office in the School of Social Work.

“Several programs of the Emeriti Center and Emeriti College, as well as other USC schools, are enriched by the generosity of Dr. Beling and the Borchard Foundation,” Redmon said. “We are indebted to them for their long-term support and for allowing us to honor the scholarship of USC Emeriti in this way.”

The Emeriti College is now accepting nominations for the 12th annual Borchard Foundation Lecture to be delivered during the 2005-2006 academic year. Nomination forms are available by calling (213) 740-8921.