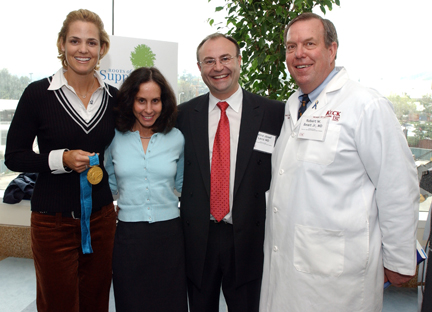 From left, Olympic swimmer Dana Torres, the Colon Cancer Alliance’s Lisa Dubow, USC/Norris oncologist Heinz-Josef Lenz and USC/Norris surgeon Robert W. Beart Jr. Torres recently visited USC/Norris to dedicate a tree in honor of those who have been diagnosed with colorectal cancer, as well as their families and caregivers.

For six years, physicians, nurses and volunteers at USC/Norris Comprehensive Cancer Center and Hospital have invited colorectal cancer survivors back to the center for a celebration of life. And as a testament to the improvements in modern-day cancer treatment, many of those same patients return year after year.

“This army has gotten bigger, stronger and more active,” said Robert W. Beart Jr., the Charles W. and Carolyn Costello Chair in Colorectal Diseases, Audrey Skirball-Kenis Chair for Colorectal Diseases and chair of the Department of Colorectal Surgery at the Keck School of Medicine.

Lenz spoke enthusiastically to former patients and their families about colorectal cancer research advances at USC/Norris and thanked them for making that research possible. Each consenting colorectal cancer patient contributes tissue and blood samples that form the basis for many of Lenz’s cancer-fighting research projects.

“We have based a lot of protocols on what we have learned from your cancers,” he told patients.

Although tissues from different colorectal tumors may look similar under a microscope, tumors may be completely different on a molecular level, he noted. By studying samples, Lenz and his colleagues can determine how different types of tumors respond to chemotherapies and new, targeted therapies.

“We are the only GI program in this country to use genetic information to make treatment decisions in our clinic every day,” he said.

According to the American Cancer Society, five-year survival rates for colorectal cancer have jumped from less than 50 percent in the 1970s to more than 62 percent today. For colon cancers that are caught early—an ever-increasing percentage of the total, thanks to screening procedures such as colonoscopy and sigmoidoscopy—the five-year survival rates jump to almost 90 percent.

Patients are living longer with advanced cancer, too. “Survival has tripled from eight months to 24 months” for patients with metastatic disease, Lenz said.

Lenz also introduced Lisa Dubow, a colorectal cancer patient and representative of the Colon Cancer Alliance. The alliance is a recently formed organization that raises awareness about colon cancer, from prevention to treatment. The group also supports patients and provides information about treatments and clinical trials.

“Treatment gives me hope,” said Dubow, who is currently receiving infusions of oxaliplatin. “But colon cancer is the number-two cancer killer in the United States. Why isn’t everybody talking about it?”

Dubow noted that the Colon Cancer Alliance recently started a program called Roots of Support, which encourages patients and their caregivers to confront cancer as a team.

Olympic swimmer Dara Torres, whose father was diagnosed with colorectal cancer in 2001, was on hand at USC/Norris to dedicate a tree as part of the Roots of Support program.

Torres has become an advocate for building a personal support network to navigate the sometimes-daunting journey through diagnosis, treatment and recovery.

Torres, a nine-time Olympic medalist, brought a gold medal to show the audience.

“But I really believe it’s the doctors and nurses who deserve the gold medals for all you do,” Torres said.

The tree symbolizes the strength of those with colorectal cancer, Torres said. It will remain inside the Norris until the Harlyne J. Norris Research Tower construction is completed.