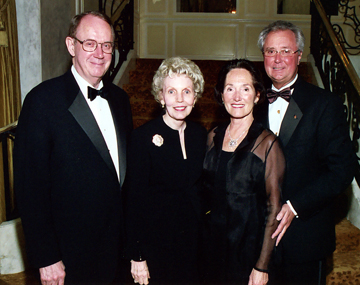 More than 400 alumni, faculty, staff and students turned out for the USC School of Pharmacy’s Centennial Celebration gala on Sunday, April 10th at the Regent Beverly Wilshire. Art Ulene, prominent author and member of the School of Pharmacy’s Board of Councilors, served as master of ceremonies.

USC President Steven B. Sample thanked long time supporters of the school and stated, “All of you here tonight can take great pride in the fact that you support a school that is working not only to advance the field of pharmacy, but also to improve the lives of people around the world.”

Commemorating a century of progressive instruction and pioneering research, the gala honored special individuals whose unwavering support has helped the school extend the horizons of professional pharmacy.

Honorees included Jane and Gale Bensussen, Josephine and William Heeres, and Helena and DeWight Titus, who were instrumental in a variety of projects to benefit current students, faculty and alumni:

• Jane and Gale Bensussen led the effort to establish the school’s Laboratory for Analytical Research and Services in Complementary Therapeutics, and the Leiner Free Radical Research Laboratory of Enrique Cadenas, professor and chair of the Department of Molecular Pharmacology & Toxicology.

• Josephine and Bill Heeres committed a planned gift to establish an endowed chair in community pharmacy —the first of its kind at any pharmacy school in the nation. In 1998, the Heeres’ lead gift of more than $300,000 created a matching gift program that raised more than $1 million in gifts and pledges that were used for the complete renovation of teaching facilities.

• Helena and DeWight Titus made a substantial gift in honor of their family to name the Titus Family Department of Pharmacy. The endowment upholds the Department’s mission to enrich drug-therapy knowledge in health care practitioners through educational interventions.

In addition, Dean Timothy M. Chan was recognized for his 24 years of service to the USC School of Pharmacy. Chan will step down from the deanship on June 30th.

He will embark on a year-long sabbatical to explore complementary and alternative medicine before returning to USC as dean emeritus and a faculty member.

Since his appointment, Chan has promoted new directions in pharmacy education and advocated a new pharmacy practice paradigm both in the United States and the Pacific Rim.

“In 1995, I accepted the deanship with full realization that I was responsible for guiding an institution with a ninety-year history of innovation and leadership,” said Chan. “Ten years later, the school continues to lead the way in curricular reform, learner-oriented teaching methods, and creativity in both clinical and basic science research. It is no surprise that the USC School of Pharmacy is considered one of the top pharmacy schools in the country.”

Founded in 1905, the USC School of Pharmacy was the first pharmacy school established in Southern California. The school was also the first nationally to grant the Doctor of Pharmacy professional degree and offer a clinical pharmacy program. About 50 percent of the pharmacists in the region are graduates from USC.

Exceeding the school’s initial goal of $25 million, the Centennial Celebration fund has raised $30 million since 2000 for curriculum enhancements, scholarship funding, renovations and scholarly research. Proceeds from the Centennial gala totaled $500,000.