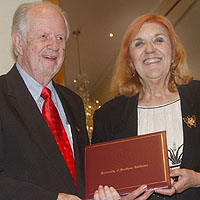 Chew retired from the USC Marshall School of Business in 1990; Donahue retired from USC Auxiliary Services in 1995 after 45 years in payroll and personnel services.

“Retirement is about having time to do things for yourself,” said Elizabeth Redmon, director of the USC Emeriti Center. Yet many who retire from USC, she said, have found that the most rewarding activities are things they do for others.

This year’s Seventh Annual Leibovitz Service Awards held in Town and Gown for retired staff members illustrated the wide range of volunteerism, Redmon said, “from local to national, from every day to times of crisis.”

� Alice Donahue retired from USC Auxiliary Services in 1995 after 45 years in payroll and personnel services, turning her energies to serving both the university community and the community-at-large with her individual acts of kindness. At USC, Donahue worked on the board of the Staff Retirement Association where she took charge of a committee of a dozen women who wrote birthday, anniversary and get-well cards to Staff Retirement Association members and hospital volunteers.

“If you spent a day with Alice,” Redmon said, “you would find her busy bringing cheer and assistance to nurses and patients at her local hospital, photocopying and distributing the Neighborhood Watch newsletter in Lakewood or attending neighborhood Community Awareness in Response to Emergencies meetings where she keeps her neighbors up to date on public safety issues.” Redmon noted that Donahue was also recently recognized as Lakewood’s “2004 Neighborhood Watch Block Captain of the Year.”

� H. Frank Chew, 81, retired from the USC Marshall School of Business in 1990 and several years later began a second “career” as a volunteer for the American Red Cross. In 1996, the psychologist met the requirements to serve with the ARC’s Disaster Mental Health unit and began his work in mental health disaster assistance. His first assignment was in September 1996, working with people affected by Hurricane Fran in North Carolina. Since that time, Chew has been involved with more than three dozen major national events.

“At disaster sites from Ventura to Guam, Frank has counseled those suffering from the psychological and physical effects of hurricanes, floods, wildfires, typhoons, tornadoes and airplane crashes,” Redmon said.

Chew’s recent efforts have been directed toward integrating service delivery, and he now serves on the recently formed Critical Response Team under the general direction of the Department of Homeland Security.

In addition to Donahue and Chew, two additional staff retirees were recognized by Redmon for volunteer service to their communities:

� Joan Ewing (USC Marshall School of Business) was honored for her recent stewardship of the H. Dale Hilton Living History Project, which produces video-taped interviews of retired faculty and staff.

Awards were presented at the New Retiree Recognition Luncheon cosponsored by the Office of the Vice President for Administration, the Staff Retirement Association (SRA) and the USC Emeriti Center. This annual event honors staff members who retired during the past year.

All new retirees were thanked for their service to the university by Harriet Servis, president of the SRA, and each was presented with a copy of “Trojan Gallery,” a pictorial history of the university from its beginning in 1880 to 1980.

Individuals celebrating their retirement in 2004 are: