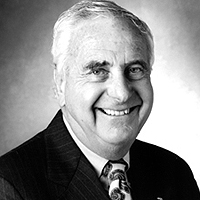 Mishell has led the department of obstetrics and gynecology since 1978.

Daniel R. Mishell Jr., the Lyle G. McNeile Professor and Chair of the department of obstetrics and gynecology of the Keck School of Medicine of USC, will resign as chair June 30. He has led the department since 1978.

Besides serving as chair and chief of professional services at LAC+USC Medical Center’s Women’s and Children’s Hospital, Mishell has held several national posts and consulted internationally.

He was president of the American Board of Obstetrics and Gynecology from 1986 to 1990 and chair of the same board from 1990 to 1994. He also was elected in 2003 as a fellow ad eundem of the Royal College of Obstetricians and Gynecologists.

He will continue to teach LAC+USC Medical Center Ob/Gyn residents and Keck School students, edit journals, lecture at continuing medical education events, see patients at Women’s and Children’s Hospital and serve as a consultant on women’s reproductive health around the world. He also serves as principal investigator on three active grants.

Mishell is a national and international pioneer in the fields of contraception, infertility and reproductive endocrinology related to menopause. His original studies spawned most of the devices and hormonal methods used for contraception today; at the same time, his research led to technologies and tools that allowed women who desired pregnancy to more easily conceive.

“In my lifetime, I don’t think there’s been anyone else who’s had a greater impact on the field of Ob/Gyn,” said Paul Brenner, professor of obstetrics and gynecology in the Keck School. “He’s one of the top clinicians in the country. In terms of teaching, he has won virtually every teaching award in his department and in the L.A. area. And as an investigator, he’s been principal investigator on countless studies.

Mishell’s major funding has come from the World Health Organization, the Population Council and the Ford Foundation.

Mishell led WHO’s only clinical research and training center in human reproduction in the United States � one of only 16 in the world.

The Ford Foundation provided multimillion-dollar grants to support research at LAC+USC Medical Center. “In those days, you could have broad concepts for your research and they allowed you to go ahead and pursue projects,” Mishell said.

Mishell conducted the first study of the use of steroid-impregnated vaginal rings for contraception and played a leading role in developing various birth control pills.

As consulting senior scientist for the Population Council’s International Committee for Contraception Research, he helped that organization develop the copper IUD and Norplant, a long-lasting implantable contraceptive, among others.

He also demonstrated that an IUD with a tail-string does not cause bacteria to enter the endometrial cavity, as had been believed, and that the mechanism of action of the IUD occurs before fertilization.

Over the years, his clinic at Women’s and Children’s Hospital has conducted studies into new and improved forms of contraception, testing low-dose birth control pills and injectable and implantable contraceptives.

“My mentor headed me in the direction of contraception because very few people were involved in it,” he said. “Now, family planning fellowships are available at 12 institutions.”

In addition, while on faculty at UCLA in the 1960s, Mishell performed the first immunoassays of human chorionic gonadotrophin in urine and serum � a breakthrough that resulted in the first pregnancy tests in the United States not involving animals such as rabbits or frogs.

“You could get an answer in less than an hour,” he recalled. “It was pretty exciting.”

He also was the first to describe how luteinizing hormone peaks in the middle of the menstrual cycle, which led to a test that allows women who want to become pregnant determine when they are most fertile.

In addition, he directed the studies that resulted in the birth at Women’s and Children’s Hospital of the first baby conceived through in vitro fertilization west of the Mississippi. He also was one of the original clinical investigators for clomiphene citrate, the first medication to induce ovulation in infertile women.

Ask Mishell about his greatest accomplishment, and he points to USC. “I’ve trained over 400 residents and made sure they would provide excellent health care in the field of Ob/Gyn,” he said. “That’s what I’m most proud of.”

Brenner noted that besides his commitment to clinical care for the underserved, Mishell also opened Ob/Gyn to more female physicians.

“More than 75 percent of Ob/Gyn residencies today are filled by women, and I think if you had to point at one person as a leader who really recruited women to the specialty, it was Dan Mishell,” he said.

Mishell also has contributed to his academic field. He has served as editor-in-chief of the journal Contraception since 1970, as well as the quarterly Dialogues in Contraception. He is editor of the Journal of Reproductive Medicine and was one of the original four authors of the textbook Comprehensive Gynecology, as well as coauthor of a number of gynecologic textbooks and senior editor of Yearbook of Obstetrics and Gynecology for 16 years.

In the future, Mishell said he hopes to modernize his specialty, encouraging Ob/Gyn residents to perform more office-based procedures such as cystoscopy and fine-needle aspiration of breast masses.

Mishell earned his bachelor’s and medical degrees from Stanford University. He had residency training in internal medicine at Bellevue Hospital (Cornell University) and in obstetrics and gynecology at UCLA. He also had a research fellowship in reproductive endocrinology at Uppsala, Sweden.

School leaders said Mishell will continue to act as department chair on an interim basis until a new chair assumes this position.

Prominent Ob/Gyn Chair to Step Down