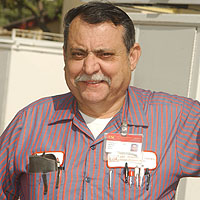 “It really surprised me,” Contreras said, referring to the nomination by those he works for in Bovard.

He’s known in the Bovard Administration building for being the first on the scene in a crisis and for following through until a problem is solved.

Nexahuhalcoyot Contreras is proud of his work ethic, American citizenship and the home he eventually made in the United States for his family after leaving Jalisco, Mexico, to labor in the fields at the age of 17.

When he was 21, he got his first job at USC, working the custodial night shift cleaning three floors in Waite Phillips Hall. He’s come a long way since.

At a ceremony in Town and Gown April 27, Contreras was honored with the President’s Award for Staff Achievement � the highest honor a staff member can achieve.

In presenting the award, President Steven B. Sample acknowledged Contreras’ 33-plus years of service to the university and his dedication to the Trojan Family.

“He is a source of inspiration and encouragement to those around him because of his pride in a job well done, his love of the university and his persistence in ensuring the work environment is safe, pleasant and functioning smoothly, Sample said. “Those who know him treasure his high moral integrity … and his outstanding professionalism.”
Contreras was humbled by the recognition.

“It really surprised me,” he said, referring to the nomination by those he works for in Bovard. He’s just doing his job, and he and his coworkers take their responsibilities seriously, he said. “I do the best I can to communicate with my employers.”

“This guy is the Rock of Gibraltar,” Cuthill said. “He’s probably the most reliable, honest and caring individual who reports to me, and he’s here every day at 5 a.m. His dedication is overwhelming, and his pride is through the roof.”

There were many years between those first night shifts at USC and Contreras’ current position.

Finally, he got the day shift. Then in 1962, he was encouraged by an administrator to apply for a position with Facilities Management Services. Hesitant, he turned his application in on the last day, and he’s been a fixture on campus and in Bovard ever since. “It was nice work for me,” he said.

As Contreras goes about his daily routine, to many he is simply “Nex,” since few attempt to pronounce his Aztec Indian name. He’s known for his casual “walk throughs” where he interacts with those in Bovard, making sure that everything is in working order.

Provost Lloyd Armstrong, Jr., one of the individuals who nominated Contreras for the award, described the employee’s work ethic as responsive and efficient, a performance carried out with enthusiasm and pride.

“There is no task too small or too large for him to tackle,” wrote Armstrong in his letter of nomination. “Whether the task is actually his to handle is not his concern. If something is in need of repair, he will make sure it gets done and very often does it himself whether it be a power outage or a plumbing problem.”

Cuthill also praised Contreras. “I don’t send a contractor out without him,” he said.

“But we’re not sure what his job description says,” said Joyce Savage, administrative coordinator in the office of the provost, “because he does everything. You call, he comes.”

Ardell L. Nolan, executive assistant in the Office of Budget and Planning, said that Contreras was one of her first contacts when she moved into Bovard. “He was referred to me then as the ‘go-to person,’ ” she said.

Last year, Contreras was anxious to return to work after suffering a stroke. He’s a man who works around the house on his vacation because he “likes to keep busy.”

“His spirit is indomitable,” said Joanne Ramirez, executive assistant to the provost. “His sheer will expedited his recovery.”

Contreras said he expects to retire someday in Baja, but there’s still plenty of work to be done, and he always keeps his pager handy.

He Maintains Enthusiasm in His Work