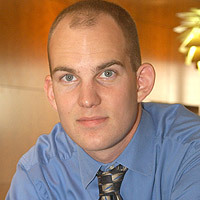 “I’m an engineer who can write a good essay and a classicist who can build a computer. It keeps me entertained,” Nash said.

Being chosen salutatorian was “a mixture of elation and astonishment,” Nash said.

He earned his Renaissance Scholar award for the breadth and depth of his studies at USC.

“I pride myself on being able to be a little of everything,” Nash said. “I’m an engineer who can write a good essay and a classicist who can build a computer. It keeps me entertained.”

Nash, who will be 23 in June, was raised in De Kalb, Illinois. In his youth, he always wondered what he’d end up doing after school and joked with his father that he’d end up being an artist.

Nash doesn’t have to wonder anymore. He has his official hire letter from the Jet Propulsion Laboratory in Pasadena, where he’ll work on artificial intelligence research and development for NASA.

In July, after a vacation in Greece with his parents � where he looks forward to being their tour guide now that he’s well versed in the classics � he’ll frame his newly minted academic degrees and begin work at JPL.

He leaves USC with expertise in numerous programming languages and knowledge of a dozen technical methodologies and software programs.

Nash describes himself as “a computer nerd and an academic at heart.” Perhaps that explains this project: a Java Applet to have “intellisense” with a dictionary of Shakesperean words.

He earned the reputation for always ending up first in whatever computer science courses he took from senior lecturer Michael Crowley.

“What’s not reflected in his all-but-perfect grades,” Crowley said, “is that he doesn’t just settle for an ‘A,’ he drives himself to master the material completely.”

Besides being “highly intelligent and highly motivated,” Nash happens to be a very nice guy, Crowley said.

Engineering and computer acronyms are a language all their own, and Nash speaks it fluently. He also took ancient Greek as a language for a semester.

In high school, Nash said he traveled to Greece in a student group led by an inspirational teacher. Then he took a general education course at USC with Vincent Farenga, associate professor of classics, during his freshman year.

Farenga said Nash wasn’t afraid to show that he had come to learn it all. “He wasn’t intimated by my syllabus � to the contrary, he sponged it up.

“It became clear that the ancient world offered Brent an alternative playground for his intelligence and the opportunity to develop what I call a ‘historical imagination’ about the world today and yesterday.”

Farenga suggested to Nash that he look into classics as a minor, and his student with a thirst for knowledge followed through. The seeds for a future Renaissance Scholarship had been planted.

“The education he’s pursued here is that rare hybrid of technological understanding and humanistic intelligence,” Farenga said. “In the classical world, that sort of knowledge would have characterized a philosopher like Aristotle or the scholars of Alexandria.”

“I was particularly happy with the paper Brent wrote in the ‘Ancient Drama’ course,” Purchase said, “in which he looked at the way male subjectivity is represented in Euripides’ ‘Bacchae’ and Chuck Palahniuk’s novel ‘Fight Club.’ ”

Purchase said Nash was very much attuned to the demands made by specific historical periods and the challenges involved in forming a narrative from such disparate material.

It struck Purchase that the combination of logical constraint and creative imagination essential to Brent’s work with computers was manifest in the way he approached his papers: He combined a strong linear argument with the willingness to entertain ideas that could break the argument yet eventually enrich it.

Purchase said Brent’s success demonstrates the way the classics can play an integral part in a life directed toward the modern world.

When Nash was earning his B.S., he was a Presidential Scholar, made the Dean’s List and was in the Engineering Honors Program.

Nash’s paper, “Engineering a Smooth Ride: Creating the Perfect Ski Through Shaping and Vibration Damping,” was published in USC’s Illumin Technical Journal, and he was a coauthor of a paper that was presented at the 10th International conference on Distributed Multimedia Systems in 2004. He’s not all techno speak though.

To illustrate his playful side, in his sophomore year he wrote an article about girls vs. ESPN that was published in Cosmo Girl.

The computer engineering and classics marriage works for Nash.

“It’s a matter of not letting myself end up concentrating so hard on engineering that I become completely one-dimensional,” he said.

Classics gives him the chance to think abstractly, he said, whereas engineering often has much more concrete answers.

Nash chose USC after visiting three schools in California and four in the Midwest. A friend who was a student in the School of Cinema-Television encouraged him to check it out.

“For some intangible reason, I just knew it was the right place for me,” Nash said.

He loves to ski and has been playing soccer since he was 6 years old. Nash was captain of one of USC’s intramural soccer teams for three years and found a way to mix sports and technology when he helped build and program a LEGO robot to play goalie in a robotic soccer game.

Nash said he found sports were an excellent way to get better at communication and teamwork.

“It’s something you need in just about any engineering job,” Nash said.

Combining Computers and the Classics