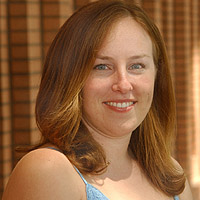 Trefz said she was “honored and surprised” to be named valedictorian.

Senior Katherine A. Trefz has been described as scholarly, quietly intense and ambitious. She also has a solid sense of social justiceand a plan for the future.

Being chosen USC’s 2005 valedictorian “is an incredible capstone moment for my college experience,” she said.

“I am absolutely honored and surprised to be named valedictorian,” said Trefz, who turns 22 in June. “I have truly loved my time at USC, and I’m a changed person in so many aspects of life because of my experiences here.”

Trefz will graduate with a 4.0 GPA while carrying a double major; she’ll receive a B.A. in history and a B.A. in political science from USC College. She also has an impressive background as a campus leader, volunteer, tutor and a mentor to other students both at USC and in the neighborhood.

Trefz will speak to her fellow graduates May 13 at USC’s 122nd commencement in Alumni Park.

“The theme is that we basically need to have a burden and an opportunity to be a student of life and to have a life of service,“ she said. “I think it’s reflective of a lot of values at USC. You can define service however you will, but it’s a need to make things better.”

Trefz said one of her professors made the wise comment that she was most inspired by people who changed her way of thinking so that she’ll never look at life quite the same way again.

She had that experience last spring when she was in the high-profile class “The Art and Adventure of Leadership,” taught by USC President Steven B. Sample and Distinguished University Professor of Business Warren Bennis.

“Dr. Bennis did that for me,” she said, “and he continues to do it, both formally through his writing, and informally, through his being.”

Her A grade in the course and her remarkable gifts in writing and organization, Bennis said, earned her the course assistant position this year.

Trefz said she’s been inspired by Bennis’ leadership theory that “centers on the idea of knowing yourself and employing your vision in the best way possible.” He asks you to look within as you seek to create change outwardly. “The concept is self-empowering but not selfish,” she said, “a hard balance to strike.”

“She has a remarkable combination of gifts,” Bennis said, “in the widest sense of being a human being. She has a brilliant mind, and I don’t think she’s quite aware of that yet.”

Bennis said that with her abilities, Trefz will be a winner at anything she attempts. He described her as having “no sense of arrogance -� just a deep sense of humility about herself.”

Her service in the leadership class may overshadow her years of work at the grassroots level in elementary schools surrounding USC and her ongoing work as a tutor in Student Athlete Academic Services.

Trefz, who has tutored student athletes in political science, history and American Studies, was a member of the USC Women’s Swim Team in her freshman and sophomore years and was a head coach in the Irvine Swim League from 1998 to 2004.

She’s interned for the Orange County Public Defender’s office and at an entertainment law firm, was director of the USC Student Senate’s Leadership Fund, where she managed an 11-member fund board and helped to allocate funds to student-run organizations for leadership development.

In 2004, she was a founding member of the Los Angeles Leadership Initiative, which organized a retreat in Sacramento for nine high-achieving secondary students from at-risk Los Angeles high schools.

She was director of communications, auction organizer and co-executive director of Troy Camp, USC’s oldest student-run community outreach program, which is aimed at local third-, fourth- and fifth-graders. USC students volunteer to take the kids to places such as the zoo or museums throughout the year, but the highlight for everyone is a weeklong wilderness camp.

Bennis praised her organizational skills, and Trefz said that probably stems from her Troy Camp activities where she learned that it had to be a “well-oiled” machine in order to be effective.

“Katie ranks with the very best students I have had in 30 years,” Seip said. “She is just exceptional on all counts. She is so deserving. The faculty in history and political science are pleased that one of our own has received this signal honor.”

Trefz earned a USC Presidential Scholarship and a Town and Gown Scholarship. In addition, she was a National Merit Scholar.

In March, she received a “Remarkable Woman Award” presented by the Office of Campus Activities and the Women’s Student Assembly, as well as the Josephine Bradley Bovard Award for scholarly achievements and leadership at USC’s 2005 Academic Convocation Awards ceremony.

Trefz said another USC individual who inspired her was Heather Larabee, director of campus activities. “Heather was able to tap into our passions, help us hone our skills and drive us to achieve individual and organizational goals.”

Trefz grew up in Irvine, with her parents and younger sister, who is currently a USC sophomore majoring in business.

Although her parents are not USC graduates, she can count as Trojans an uncle (’82), two grandparents (’39) and a great-uncle who graduated in 1899.

She attributes her value system to her parents, from whom she learned solid work ethics “by having to prove yourself before expecting to just get something. It’s the opposite of entitlement.”

Trefz said she chose USC for a number of reasons � the scholarships, reputation, location and size, to name a few. But the determining factor, she said, was how these individual aspects worked together to create USC’s unique atmosphere � “that mix of pride, knowledge, passion, service and loyalty you feel on campus.”

When she visited campus as a high school senior, she was struck by the potential to feel at home on an enclosed campus while not feeling limited by it.

“My instinct was right,” she said.

Both Bennis and Seip wondered why Trefz had not applied for a Rhodes Scholarship at Oxford, saying she would have been a shoo-in for the honor that has both a scholarship component and an athletic requirement.

But with her keen sense of social justice, Trefz said she has her sights set on pursuing public interest law at UC Berkeley’s Boalt Hall.

After a summer of traveling and relaxing, she will head north.

“There’s a great need for social justice in the inner cities,” Trefz said. “In the work I’ve done with Troy Camp, I see what a little bit of attention can do.”

Valedictorian With a Sense of Social Justice