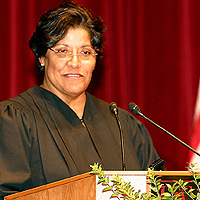 Cooper earned her J.D. from USC Law School, where she was a member of the Southern California Law Review.

Candace D. Cooper, presiding justice of the California Court of Appeal and a 1973 USC Law graduate, will impart her wisdom and advice at the 2005 USC Gould School of Law annual commencement ceremony Sunday, May 15.

The day’s proceedings will begin at 3 p.m. on the steps of the Von Kleinsmid Center. The reception will follow in nearby Alumni Park on the USC University Park campus.

USC Law Dean Matthew L. Spitzer will take the stage to recognize the 202 students receiving juris doctorate degrees during commencement proceedings. Approximately 45 percent of the graduating class identify themselves as ethnic minorities; it is one of the most diverse graduating classes in USC Law’s history.

Additionally, 40 foreign graduate students from 14 different countries will receive master of laws degrees. Many of these foreign law graduates are associates at leading law firms, employed as corporate legal counsel and as business professionals in top companies worldwide. Others work for the governments and ministries of their home countries.

Justice Cooper was appointed by Gov. Gray Davis as presiding justice to the California Court of Appeal, Second Appellate District, Division Eight. She was confirmed in 2001.

She served as associate justice of the same district from 1999 to 2001. Prior to this, Cooper served as a judge of the Los Angeles Municipal and Superior Courts, following appointments by Govs. Jerry Brown and George Deukmejian. She practiced law with Gibson, Dunn & Crutcher from 1974 to 1980.

“We are honored to have Justice Cooper as our commencement speaker,” Spitzer said. “She is a devoted graduate of the Law School, a highly respected judge and gifted legal scholar. She’s a remarkable inspiration for our graduating class.”

Jeffrey Esser, president of the Class of 2005, will deliver remarks, and professor Elizabeth Garrett will offer reflections to the graduating class that includes students in the first course she taught at USC.