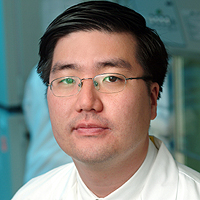 Allen Yang, assistant professor of medicine in the Keck School of Medicine of USC, has delved into the basic science behind cancer’s inner workings.

One minute Allen Yang is an oncologist, caring for patients with leukemia. The next, he is a basic scientist, exposing cancer cells in his lab to an experimental drug that may soon join medicine’s cancer-fighting arsenal.

Balancing research time with his patient-care time can be tough.

“But there are advantages in both worlds,” said Yang, assistant professor of medicine in the Keck School of Medicine of USC. “And the advances you make in one benefit the other.”

Yang is one of a number of new recruits who joined the faculty at USC/Norris Comprehensive Cancer Center over the past year. He and fellow faculty member Ana Aparicio, assistant professor of medicine, add further punch to translational research underway at USC/Norris.

On the clinical side, he is developing a program to offer trials of investigational therapies, based in epigenetics, to patients with hematologic malignancies that have resisted traditional medications.

Yang attended medical school at USC, where he enrolled in the rigorous M.D./Ph.D. program. While learning to treat patients, he also delved into the basic science behind cancer’s inner workings.

He joined the lab of USC/Norris Director Peter Jones, an expert in the still-nascent field of DNA methylation, who became his mentor.

DNA methylation is a way in which the body silences or locks certain genes. When the locked-up genes are the very ones that are supposed to keep cells from growing out of control, cancer may result.

In 2001, Yang joined leukemia experts at the M.D. Anderson Cancer Center in Houston.

There, he began working with decitabine, an experimental methylation-inhibiting drug he first studied in Jones’ lab.

Scientists knew decitabine seemed to fight blood cancers, but it was hard to tell how well it worked from patient to patient and why.

Yang developed a sensitive test to show how strongly decitabine stifled DNA methylation in each patient. The valuable test provides insight into how the drug acts, and Yang hopes it will help oncologists use decitabine effectively in the future.

Much of that work will go on at USC/Norris, where Yang returned in 2003. Already he has been pairing decitabine with hydroxyurea to see if the drugs work even better in combination.

“We’re also testing new demethylation drugs, and existing drugs that seem to be methylation inhibitors,” he said. “Once we figure out how these are inhibiting methylation, we can then try to make them more potent.”

Yang’s colleague, Ana Aparicio, pursues similar goals in solid tumors.
Aparicio is excited about the prospect of making cancer discoveries that can translate to treatments.

“If you’re an oncologist, people seem to think, ‘How depressing,’” said Aparicio, a native of Madrid, Spain. “But oncology really is one of the areas where you can make the most difference in people’s lives.”

One reason for this bright outlook may lie in new classes of medications that draw on recent epigenetics research findings.

“These drugs are five years � or even less � away,” Aparacio said.

She should know: As a fellow, she conducted some of the drugs’ first clinical trials at USC/Norris, evaluating them in patients with melanoma, breast cancer and other solid cancers.

When not treating patients � she specializes in genitourinary cancers, such as malignancies of the bladder � Aparicio conducts research within Jones’ lab.

She is interested in drugs called histone deacetylase (HDAC) inhibitors, which might form an especially dynamic duo with demethylation drugs.

HDAC inhibitors seem to create cancer roadblocks � such as deterring tumors from growing new blood vessels to feed themselves, while encouraging damaged, potentially cancerous cells to annihilate themselves.

On their own, demethylation drugs are intriguing, too. For one, she said, demethylation drugs such as decitabine are surprisingly more effective in low doses than high ones. That means researchers need to do some homework through clinical trials, studying how various doses of the drugs affect tumors in patients.

“But the problem with solid tumors, such as breast or colon cancer, is that you can’t keep going in and testing a person’s cancer cells to see how active the drugs are in their body,” she explained. “You need to find another way.”

So Aparicio is seeking out convenient biomarkers � tests that can be done on blood or saliva � that signal how well the drugs are fighting solid tumors during treatment. It is a perfect assignment for someone who admits to being “curious about everything.”

“The research simply makes me a better oncologist,” Aparicio said. “You need to understand the drugs you’re working with to apply them better in the clinic.”