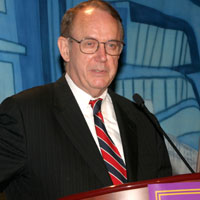 “USC remains committed to Los Angeles because this city is at the very core of the university’s mission and identity,” Sample said.

President Steven B. Sample has received the Heart of the City Award, the highest honor bestowed by the Central City Association of Los Angeles.

Sample was honored for his “vision, passion and leadership” at the CCA’s 11th annual awards ceremony.

The award was presented to Sample for his commitment to Los Angeles, his support for the revitalization of the downtown area, his leadership of the university and in recognition of USC’s 125th anniversary.

More than 1,400 of the city’s most prominent political, business and civic leaders gathered at the sold-out event April 28 at the Shrine Auditorium, where actor Dick Van Dyke served as master of ceremonies.

In accepting the honor, Sample said, “USC is proud to be part of a vibrant corridor of arts, entertainment and education, which stretches from Disney Hall to the Natural History Museum of Los Angeles County.”

“By bestowing this honor on me today,” he said, “you’re recognizing the efforts of tens of thousands of people who have dedicated enormous energy, intelligence and creativity to building up the university and its surrounding communities through the decades.”

Sample acknowledged that, in the past, USC presidents have been asked to move the university from the inner city to the suburbs. “But USC chose to remain a city university in both location and in spirit,” he said. “Today USC remains committed to Los Angeles because this city is at the very core of the university’s mission and identity.”

Carol E. Schatz, CCA president, called Sample “an extraordinary man. We were thrilled to be able to honor him.” She said the university’s rising academic standards and its status as a research facility has grown exponentially over the years.

“USC is a very solid anchor on the southern end of downtown,” Schatz said. “Combined with all the new buildings that are changing the face of the campus, its community outreach and its tutoring programs, the university is incredibly impressive.”

A video presentation that highlighted the university’s contributions to the city and Sample’s personal dedication to those efforts was shown to an audience that included members of the Los Angeles City Council, as well as numerous county, state and federal elected officials.

In the narrative, Sample was praised as “a Renaissance man, an idea man,” and he was lauded for his relentless pursuit of excellence, his personal commitment to improving USC’s neighborhood through community building programs, support for nearby Exposition Park and for creating a new image of downtown Los Angeles as a research center.

The CCA is a business advocacy association devoted to promoting the economic health and quality of life in Los Angeles � particularly its core � through creation of a vibrant downtown powered by business, government, residents, arts and entertainment.