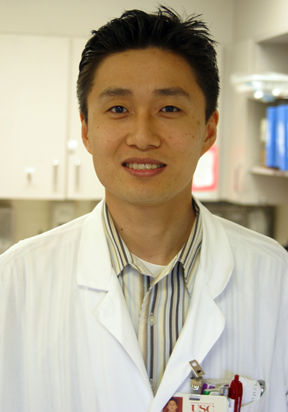 A year after winning a Merit Award from the American Society of Clinical Oncology, or ASCO, Keck School of Medicine hematology/oncology fellow David Park has won a Young Investigator Award from that organization.

ASCO grants Young Investigator Awards to physicians in their final year of a fellowship program or in the first year afterward. This year, ASCO bestowed the honor on only 45 of 148 researchers who applied. Park will receive a one-year grant of $35,000 to fund his studies.

ASCO will present Park with the award at its annual meeting in Orlando, Fla., May 13 – 17.

Park’s colleagues at USC/Norris Comprehensive Cancer Center recognize him as a bright, creative and energetic physician-scientist.

“He has been outstanding,” said gastrointestinal oncologist Heinz-Josef Lenz, associate professor of medicine and Park’s mentor. “He is a new star in the sky of molecular biology: He’s smart, innovative and interested in details.”

As Park puts it, understatedly: “I like asking interesting questions and figuring out ways to answer them.”

Park came to the Keck School in 1999 for a residency in internal medicine at LAC+USC Medical Center after getting his medical degree at Mt. Sinai Medical College in New York.

He followed his residency with a fellowship in hematology/oncology, which he expects to complete in 2006.

He started with Lenz before the second year of his internal medicine residency, investigating the role of pharmacogenomics in the treatment of colorectal cancer. “Working with Dr. Lenz has been an amazing experience,” he said.

Early on, Park was involved in some small projects with the thymidylate synthase gene, a key focus of Lenz’s lab. “Then I worked more on DNA-repair genes and their impact on platinum-chemotherapy-treated patients,” he said. Moreover, he, Lenz and their collaborators were the first to show that variations in the Xeroderma pigmentosum group D, or XPD, DNA-repair gene influenced patients’ outcome after oxaliplatin chemotherapy.

With his Young Investigator Award, Park will take his research a step further. He will study the epidermal growth factor receptor, or EGFR, which is a target for a number of new agents, including the well-known new drug Erbitux. Park explains that the EGFR gene seems to play a role in DNA repair, and researchers know that one way cancerous cells resist and escape the onslaught of platinum-based chemotherapies (such as oxaliplatin) is by repairing their own DNA.

He would like to see if variations in the EGFR gene influence outcome after platinum-based therapy.

“As chemotherapeutic regimens become more complex—combinations of 5-FU, oxaliplatin, Avastin and the like—it would be helpful to see which pharmacogenomic markers predict clinical outcome to these agents. That becomes harder as you add more agents to the mix,” Park said.

“Eventually, the accumulation of all these data will hopefully lead us to be able to identify patients, in advance, who would benefit most from certain agents, versus others.”

He is also collaborating with Alexandra Levine, Ronald H. Bloom Family Chair in Lymphoma and chief of hematology, to design a pilot study looking at the role of pharmacogenomics in the treatment of HIV-related lymphoma.

All this while Park sees patients as part of the hematology/oncology service. Clearly, the outcome for people living with cancer is at the center of every medical question he asks.

As Park noted: “Some of these answers will hopefully have an impact in the way we manage our patients in the future.”