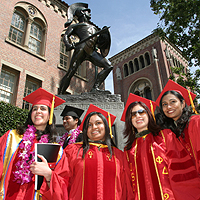 The resplendent colors of commencement filled Alumni Park on Friday, May 13 as more than 8,000 students celebrated their graduation in the company of USC faculty and administrators, trustees, honorary degree recipients and an estimated 30,000 relatives and friends.

President Steven B. Sample conferred 4,160 bachelor’s degrees, 3,370 masters and 890 doctorates at the 122nd commencement ceremony. A loud cheer went up when Sample spoke of the students’ enduring bond to USC.

“Even though you are graduating, your membership in the Trojan family does not end on this day. You now and forever will be a Trojan,” he said.

To demonstrate, Sample invited the “half-century Trojans” � a group of those who graduated in the class of 1955 � to stand and be recognized.

Sample acknowledged the academic excellence of the graduating class, as well as the hard work that brought them to graduation, but he offered a warning. While it is natural to ease up after a hard-won success, he said, Trojan graduates should always strive for new challenges.

“I urge you to maintain your momentum,” he said. “Trying harder, especially when you’re winning, is a Trojan hallmark.”

Sample singled out the more than 200 Renaissance Scholars who completed double majors or a major and minor in unrelated subjects, including salutatorian Brent Nash, a computer science major with a minor in classics who also earned his master’s in computer science this year.

Valedictorian Katherine Trefz, a double major in political science and history, called the day “not a beginning but a threshold” from which graduates look backward and forward. The university and its graduates have changed each other over the past four years, she said: “USC is now weathered by our experiences and marked by our footsteps.”

Commencement speaker and USC alumnus Neil Armstrong, trim and elegant with smooth gray hair and silver-framed glasses, addressed his speech to the assembled dignitaries “and most importantly, members of the class of two thousand FIVE.”

The special emphasis sparked a loud cheer, followed by laughter a minute later when he described commencement as “a joyous day for the graduating students, relieved faculty, thankful parents and amazed siblings.”

The degrees awarded on commencement affirm that graduates have demonstrated the ability to learn, Armstrong said.

He offered his interpretation of what that should mean: “I would hope that you have come to appreciate the value of simplicity. A simple explanation is often the best, but even more often, the most difficult to recognize. I hope you have become comfortable with the use of logic, without being deceived that logic will inevitably lead you to the correct conclusion.”

To foreign students, who come to USC in greater numbers than to any other American college, Armstrong said, “You honor us by choosing this university.”

Armstrong, the first person to walk on the moon, avoided dwelling on his famous achievements, except to recall that when he was a student, any professor who suggested that space travel might be a subject of serious study would have been ridiculed.

“You can’t imagine the change and related opportunity that will arise for you in the years ahead,” he said.

That opportunity may not and should not be defined in material terms, Armstrong cautioned.

“You can lose your health to illness or accident, you can lose your wealth to all manner of unpredictable sources. What are not easily stolen from you, without your cooperation, are your principles and your values,” he said.

“They are your most important possessions, and if carefully selected and nurtured will well serve you and your fellow man.

“Society’s future will depend on a continuous improvement program for the human man’s character. And what that future will bring I do not know, but it will be exciting.”

Armstrong ended with a quote from Antoine de Saint Exup�ry, beloved author of “The Little Prince,” who wrote about the future: “Your task is not to foresee it, but to enable it.”

Armstrong received an honorary degree at the ceremony, along with: Dennis F. Dougherty, USC senior vice president for administration and the architect of a transformation in the university’s administrative model; Eberhardt Rechtin, USC professor emeritus of electrical engineering, who wrote the founding textbook in systems architecting and led a team at NASA’s Jet Propulsion Laboratory that made seminal discoveries in digital communications; Andrew J. Viterbi, inventor of the algorithm that enabled noise-free wireless transmissions, USC trustee and philanthropist whose many contributions include a naming gift to the USC Viterbi School of Engineering; John Williams, the renowned composer of film music and five-time Academy Award winner; and Robert Zemeckis, USC alumnus, writer, producer and director of films including “Forrest Gump,” for which he won an Oscar.

Students and their families at the ceremony expressed a mixture of elation, relief, pride and fatigue.

“I can’t believe it’s already over. Four years: It went by quickly,” said Eli Roberts, who earned a B.A. in Middle Eastern studies and American government. Roberts, originally from Washington, D.C., will enter the agent training program at the ICM talent agency.

“In three years I’ll be an agent,” he said with the sunny optimism of a fresh graduate.

The Movius family from Huntington Beach took two generations to get it right. Mother Maureen went to UCLA, but daughters Hilary and Lauren both graduated from USC this year.

Hilary earned a B.A. in political science, while Lauren got her master’s in global communications from the USC Annenberg School and is going back for her doctorate.

“Annenberg’s wonderful. It’s like a big family,” she said.

Prakarn Kolakul came from Thailand to complete a master’s degree in computer science.

“It’s a little bit difficult, but eventually I made it, so I feel very good,” said Kolakul, who plans to work here “a few years” before returning to Thailand.

Greg Farr appeared rested despite having stayed up all night. He was graduating with a B.A. in international relations and the indelible memories of playing safety on the country’s top collegiate football team.

“It’s an accomplishment,” he said of his time in college, “and you’ve gotta really appreciate it because a lot of people don’t have this opportunity. I’m thankful that I got it.”

This summer Farr will act in an upcoming movie, “The Gridiron Gang,” starring The Rock. He has not decided what path to take, but he said he knows a lot of good ones are open to him.

“It’s sad to leave, but it’s also going to open doors to new things,” he said.