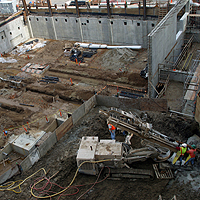 The end of the school year brings new beginnings.

As in years past, a host of new construction projects began the Monday after commencement on both the University Park and Health Science campuses. In addition, work is continuing on several other high-profile projects already under way.

“There is always a high level of construction activity during the summer,” said Curt Williams, USC’s vice president of capital construction development. “All of these projects are providing some badly needed space and parking for the university in order to help it to achieve the goals that are called out in the new strategic plan.”

To see a map of the construction, click here.

One key project is the major structural upgrade of student resident hall Webb Tower, the first significant renovation of the 23-year-old building.

The project will cause some disruption to the circulation through and around Gate 5. The renovations are slated for completion by May 2006.

An expansion of Watt Hall will also begin this summer. The architecture and fine arts building will be expanded to add approximately 20,000 square feet of classroom space. Construction will continue through the fall, with an expected completion date in November.

Work is continuing on the Galen Center. Construction on the highly anticipated events and athletic center began in December 2004 and is moving along quickly. The sidewalk and parking lane on Flower Street are closed, as is the sidewalk on Figueroa. Construction is still on track to be completed in August 2006.

Work has also just begun on two projects related to the Galen Center. Construction on the adjoining Athletic Pavilion began on May 1 and is also slated for completion in August 2006. Work has also commenced on Parking Structure II, located between the Radisson Hotel and Flower Street. The structure will create 1,200 new parking places for the center, with construction slated to finish in June 2006.

On the Health Sciences campus, work is under way on the Harlyne J. Norris Cancer Research Tower, an eight-story structure that will primarily house research facilities. Construction of the 175,000-square-foot facility is slated for completion in early 2007.

The other summer construction projects follow below. Unless otherwise noted, all projects will be completed before the start of the fall semester. Any disruption to pedestrian traffic will be minimal and localized, Williams said.

-Parkside F &G (UPC): The Parkside apartments on the southern part of campus will be structurally upgraded.

-Bloom Walk (UPC): Underground pipes will be laid to connect into the Thermal Energy Storage; the walk and surrounding landscape will then be refurbished.

-Harris Hall (UPC). The gutters will be cleaned and resealed, and the painted artwork on the stucco outside the building will be repaired. Some glass doors and frames will also be replaced.

-Student Health Center (UPC): Parts of the first floor interior will be reconfigured.

-Social Services Building (UPC). The building’s deck will be waterproofed.

-Nazarian Pavilion Caf� in Doheny Memorial Library (UPC): A space in the northeast corner of Doheny, next to Doheny Courtyard, is being converted into an English teahouse-like caf�; construction will be completed in early October.

-Area between Hoffman Hall to Hancock Auditorium and Museum (UPC): Underground pipes will be laid to connect into the Thermal Energy Storage; the walk and surrounding landscape will then be refurbished.

-Law Library (UPC): A renovation will slightly expand the size of the building, increase handicap accessibility and update the library space itself.

-3434 Grand St.: Building improvements began in late April and are slated for completion in February 2006. Upgrades include seismic work and cutting new windows. The onetime warehouse will house office space, the university data center and the USC book depository, which has already moved into the space.

-North Campus Housing (UPC): Ten housing structures on the north side of campus will receive upgrades to their fire/safety alarm and sprinkler systems.

-Hoffman Medical Research Building (HSC): Outside improvements will be made to the north and south sides of the building.

-San Pablo Boulevard (HSC): A mid-block crosswalk will be added between the Zilkha Neurogenetic Institute and the Health Care Consultation Center.

-Keith Administration Building (HSC): A renovation of the Mayer Auditorium will include a remodeling of the restrooms on the lower level and the addition of new seats and electronic equipment in the auditorium itself.

-Health Science parking (HSC): A handicap access ramp will be added between the third and quad levels of the structure.

-John Stauffer Pharmaceutical Sciences Center (HSC): Renovations to this building include a fourth-floor remodel; a remodel of the fifth-floor lab; a refurbishing of the seventh floor; and a refurbishing of the Centennial Park Entry Plaza, which includes landscaping and the addition of a fountain.

-USC Healthcare Consultation Center (HSC): The pharmacy on the first floor will be enlarged and remodeled.

-McKibben Hall, McKibben Annex and Bishop Building: (HSC) The multidisciplinary labs will be refurbished, with improvements made to sound and lighting.

-Campus-wide signage (HSC): Building address signs will be added to each building. This project is about 50 percent complete.