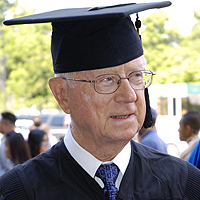 “You can’t do anything alone � you need other people’s support and assistance,” Robert Shotwell said on the eve of his graduation from USC.

In 1943, as Robert Shotwell was completing his senior year in business at USC, a few credits shy of graduation, little did he know that it would take more than 60 years to earn his undergraduate degree.

It was the middle of World War II, and though he expected to serve, he was completely unprepared when a campus bus of U.S. Army induction officers rounded up him and his fellow students and transported them to an induction office in San Pedro.

Shotwell and his future wife, Barbara, who also attended USC, both served at March Air Force Base in Riverside County � Shotwell in the U.S. Army Corps of Engineers and Barbara as an air traffic controller.

Those were the days when the couple could buy a house with their combined $18-a-month salary and a military housing loan.

After serving four years in the Army, Shotwell and his wife settled in La Canada, and Shotwell embarked on a successful marketing career in the emerging information industry.

After two marketing jobs in California, Shotwell was recruited by Olivetti Underwood Inc., a calculator and typewriter company in New York, where he served as head of the copying products division.

During his time there, he received many awards and pioneered the coin-operated copying machine.

He later formed Robert Shotwell and Associates, an independent consulting and marketing firm that advised entrepreneurs.

Shotwell attributes his success to the excellent professors he had at USC and the network he built as part of the USC family.

“You can’t do anything alone � you need other people’s support and assistance,” Shotwell said on the eve of his graduation from USC.

So at the age of 84 and still dabbling in business, why has Shotwell pursued a degree he almost earned some 60 years ago?

Both he and his wife thought felt it would inspire others to complete what they start. But it wasn’t an easy road.

After two years of letter-writing, e-mails, phone calls and even a videotape showing a World War II vet receiving a degree at the University of Louisiana, “the letter” arrived in November 2004, inviting Shotwell to participate in the USC Marshall School of Business’ May 13 commencement.

He and his wife and several members of his family flew from Camden (Maine) and Boston to attend the ceremonies.

Shotwell offered the following words of wisdom to current and future graduates: “Persistence is absolutely essential. Stay on course through the ups and downs � if you’re stuck, no one’s going to hand it to you on a silver platter.”

Persistence Pays Off for Octogenarian