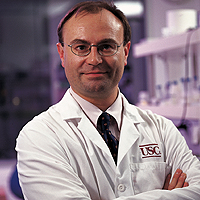 A unique, targeted anti-cancer drug appears to show promise against neuroendocrine tumors � stubborn cancers that have traditionally responded poorly to chemotherapy, according to research findings announced at the 2005 Annual Meeting of the American Society of Clinical Oncology, or ASCO.

Called SU11248, the drug was evaluated in a phase II clinical trial for carcinoid tumors and pancreatic islet cell tumors. About 80 percent of patients saw their disease stabilize (cancer stopped growing), and about 10 percent of those with islet cell tumors had tumors that actually partially shrank in response to the drug.

Today, only 18 percent of patients diagnosed with metastatic neuroendocrine cancer survive for five years after diagnosis, and complete cure is impossible.

Doctors diagnose about 2,500 of the tumors in the nation a year, according to the latest estimates by the American Cancer Society.

USC/Norris Comprehensive Cancer Center was one of only a handful of sites in the nation to offer the trial. The study was presented at ASCO by Matthew H. Kulke, assistant professor of medicine at Harvard University.

SU11248 is part of a new generation of investigational, multi-targeted therapies, Lenz said. It hinders three types of proteins and receptors that cancer cells need to thrive. It appears to go after not only the cancer cells, but also the blood vessels that nourish cancerous tumors and the tissue that supports tumors in the body.

“I’ve never seen a drug quite like this one,” said Lenz, director of gastrointestinal oncology at USC/Norris.

For comparison, he explained, the cancer drug Gleevec has one pathway of action rather than three.

Oncologists hope that the more mechanisms a drug uses to inactivate a cancer cell and keep it from doing its malignant work, the harder it is for a cell to escape the drug.

Physicians enrolled 105 participants at eight sites. Patients took the drug as a pill once a day for four weeks, then went without the drug for two weeks to complete the cycle. Patients continued cycles for a year.

The study presented data on 93 patients � 52 with islet cell tumors and 41 with carcinoid tumors. Among islet-cell patients, five had a partial response to the drug, 40 had stable disease and three had progressive disease (four were not evaluable).

Among carcinoid patients, one had a partial response, 34 had stable disease and two had progressive disease (another four were not evaluable).

The study indicated the drug was well-tolerated, with side effects including fatigue and lowered white-blood-cell counts (neutropenia).

Patients With Tumors May Have Options