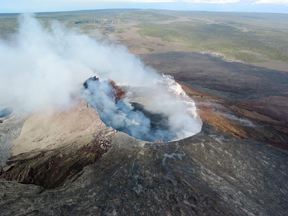 Pu`u `O`o is the Kilauea volcano’s largest cone and is one of many vents emitting gasses under study by USC preventive medicine researchers. Scientists are investigating volcanic smog’s effects on children’s respiratory health.

If there is trouble in paradise, leave it to Keck School of Medicine of USC preventive medicine researchers to help get to the bottom of it.

The Kilauea volcano on Hawaii’s Big Island has been erupting since 1983, seeping molten rock that draws countless tourists and volcano buffs to its dangerous vents.

But for children who are growing up and living on the island, the perils of the volcano might come not from its superheated lava, but from its sulfur-charged vapors.

As Kilauea’s plumes rise into the gentle trade winds that embrace the island, children breathe the volcano’s pollutants, which may harm their developing lungs. Worried about respiratory problems, the National Institute of Environmental Health Sciences (NIEHS)—one of the National Institutes of Health—called on the expertise of Keck School researchers.

“When you think of Hawaii, you don’t think of air pollution, but a whole generation of children has grown up with Kilauea,” said Edward Avol, professor in the environmental health division of the Department of Preventive Medicine. “They’re breathing particles and gasses.”

Kilauea is the single largest source of sulfur dioxide in the world, emitting as much as 1,800 tons of the gas a day, he said.

Scientists know that sulfur dioxide irritates the lungs of people with asthma enough to immediately cause an asthmatic episode.

The volcano also pumps out sulfuric acid. And when the scalding lava flows south and meets the sea, the resulting plumes of steam are laden with hydrochloric acid.

For more than a decade, pollutants comprising a mixture of gas and aerosol of sulfuric acid and sulfates have shrouded parts of the island. The haze is called volcanic smog, or vog.

But no one knows whether vog can cause asthma, how it may affect children’s developing lungs, or which children are most at risk.

At the same time, the pollutants released by the volcano include the same airborne chemicals produced by coal-burning power plants, paper mills and cargo ships that consume fuel oil. Sulfuric acid particles commonly form part of urban air pollution, too, Avol said; so, the volcano’s contaminants, studied in the otherwise pristine air of Hawaii, could teach scientists about pollutants found in polluted urban cities around the globe.

In 1997, the NIEHS spawned a framework for vog-related health research in Hawaii, and Avol joined the effort as a technical advisor, working with the Hawaii Department of Health. Avol and other members of the Southern California Environmental Health Sciences Center at USC had experience assessing relationships between air pollution and children’s respiratory health.

Today, USC investigators are supporting two efforts in Hawaii: an NIEHS-funded project to investigate vog’s long-term effects on asthma and lung health and a Centers for Disease Control and Prevention project to examine children’s acute, day-to-day problems with asthma.

The NIEHS-funded, long-term project in-cludes the Keck School and the Harvard School of Public Health as co-investigators, as well as several Hawaiian agencies and organizations. The project’s principal investigator is Elizabeth Tam, a pulmonologist from the University of Hawaii’s John A. Burns School of Medicine. The study not only means to understand vog’s respiratory effects on Hawaiian children, but also to educate Hawaiians about asthma and establish a partnership among academia, rural health agencies and communities on the islands.

During the five-year project, researchers will recruit and study 2,500 children (initially as fourth and fifth graders) from five areas on the Big Island: the Kona Coast (west Hawaii), Hilo (east Hawaii), Ka’u, (on Hawaii’s south coast), Waimea and the Kohala Coast (on the northern tip of the island). The study team will monitor kids’ lung function—a measure of how well their lungs work—and relate that to daily levels of vog where the children live. Winds tend to blow the pollutants primarily to the south coast and up the west side of the island, through Kona, but winds can shift and send gasses and particles northward and even to other islands.

The CDC-funded project, meanwhile, includes USC and the Hawaii Department of Health and is led by University of Hawaii at Hilo toxicologist J.P. Michaud.

Avol and colleagues helped set up air monitoring stations and trained study personnel and continue to assist to their Hawaiian colleagues.

For more details on volcanoes and vog, visit the U.S. Geological Survey’s Web site at http://volcanoes.usgs.gov.