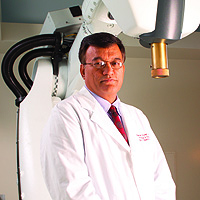 Researchers studying an innovative treatment for advanced head-and-neck cancer, combining chemotherapy and radiation, report that about half of the patients were still alive four years after treatment.

The treatment, called RADPLAT, combines radiation and a platinum-based chemotherapy drug called cisplatin. What makes the treatment unique is that instead of providing chemotherapy intravenously, oncologists inject cisplatin through tiny catheters directly into the arteries that feed the tumor, sending the drug exactly where it is needed.

“Our results were extremely encouraging,” said study presenter Parvesh Kumar, professor and chair of radiation oncology in the Keck School of Medicine of USC and USC/Norris Comprehensive Cancer Center. “The benefits seen in patients with advanced, inoperable disease were comparable to benefits seen with the same therapy in patients with earlier-stage disease.

“Based on these favorable results, we should certainly consider a bigger phase III clinical trial for this technique in a wider, broader group of patients,” Kumar said.

Physicians at 11 university medical centers recruited 67 patients for the study, and performed the treatment in 61 patients.

Patients had stage IV-T4 disease: Tumors were large and inoperable. Squamous cell carcinoma is difficult to treat successfully in this advanced stage. Tumor sites ranged from the mouth to the larynx.

The oncologists inserted catheters into the blood vessels feeding the tumors and injected cisplatin over four weekly sessions. At the same time, they introduced a neutralizing agent into the rest of the body. That agent combines with cisplatin to produce a harmless substance that is flushed away.

As a result, the cisplatin is less likely to harm healthy parts of the body. The technique allows physicians to use a higher dose of cisplatin than would be possible when infusing chemotherapy intravenously.

Moreover, using this intra-arterial route, the researchers can give the same amount of cisplatin chemotherapy over about three weeks that would ordinarily take about five to six months to deliver through the intravenous route � with fewer systemic side effects.

The researchers, who administer radiation therapy at the same time, have found that chemotherapy makes the cancer cells more vulnerable to radiation, and radiation boosts the overall success of the therapy.

These results are even more encouraging considering that patients preserved their organ function, such as speech and swallowing, Kumar noted.

Severe side effects, which traditionally pose a significant quality-of-life issue for those with head-and-neck cancer, varied depending on the institution conducting the therapy.