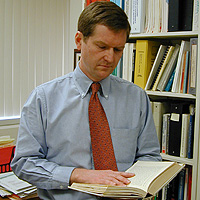 “This is a potentially important public health problem because there are many children who live near major roads,” said lead author Rob McConnell, associate professor of preventive medicine in the Keck School.

Children living close to a major road are significantly more likely to have asthma than children who live farther away, according to study findings presented at the American Thoracic Society International Conference.

Children living within 75 meters (about 82 yards) of a major road had a nearly 50 percent greater risk of having had asthma symptoms in the previous year than were children who lived more than 300 meters (about 328 yards) away, according to researchers in the Keck School of Medicine of USC.

“These findings are consistent with an emerging body of evidence that local traffic around homes and schools may be causing an increase in asthma,” said lead author Rob McConnell, associate professor of preventive medicine in the Keck School. “This is a potentially important public health problem because there are many children who live near major roads.”

The study included more than 5,000 5- and 6-year-old children living in Southern California who were part of the Children’s Health Study. The researchers determined how far each participating child lived from a major road: a freeway, large highway or a feeder road to a highway or freeway.

“The next step will be to verify these results with actual measurements of pollution around the homes near and distant from major roads, and to see if children who live in areas with heavy traffic develop asthma as we follow them,” McConnell said.

McConnell noted that California has passed a law that prohibits building any new school within 500 feet of a freeway or busy highway.

“If we establish that children’s asthma is linked with heavy traffic, then it’s likely to be a long-term and expensive proposition to begin to design cities to separate transportation corridors from where children live, go to school and engage in outdoor exercise,” he said.

Living Near Roads May Cause Asthma