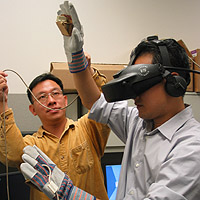 Younbo Jung (right) reaches out to touch objects in a virtual environment he sees in his goggles, while fellow researcher Shih-Ching Yeh steadies the cable connection.

Stroke patients who face months of tedious rehabilitation to regain the use of impaired limbs may benefit from new haptics systems � interfaces that add the sense of touch to virtual computer environments � in development at USC’s Integrated Media Systems Center.

The new systems, being designed by an interdisciplinary team of researchers from the USC Viterbi School of Engineering and the Annenberg School for Communication, are challenging stroke patients to grasp, pinch, squeeze, throw and push their way to recovery.

With a $1.8-million grant from the National Institutes of Health, the team has come up with an assortment of new applications.

Some are designed to make stroke survivors stack, push or pour liquid out of three-dimensional objects in immersive environments, while others force them to pick up objects and move them through virtual corridors without bumping into walls or falling into booby traps.

“Haptics, which adds the sense of touch to 3-D computing, lets stroke patients interact with virtual worlds by feel,” said Margaret McLaughlin, an IMSC investigator and professor of communication at the USC Annenberg School for Communication.

“The big advantage is that we can control the environment and design cyber tasks that target each patient’s impairment,” she said.

McLaughlin, a co-editor of Touch in Virtual Environments, works with researchers in the Keck School of Medicine of USC to design the new haptics technologies.

“The technology got its start in commercial gaming with the debut of inexpensive, non-immersive versions using force-feedback joysticks and steering wheels that vibrated as the driver sped along a video racetrack,” she said. “But in university laboratories, the availability of more sensitive, high-end devices that could render touch sensations in three dimensions quickly led to applications in more serious pursuits.”

Haptics interfaces began to emerge in such fields as medical and surgical training programs, flight school, teleoperations and scientific visualization. In 2004, NIH saw a need for the technology among stroke survivors, said principal investigator Thomas McNeill, professor of cell and neurobiology, neurology and neurogerontology in the Keck School, and awarded USC and the University of Texas, Austin, a grant to pursue the work.

“More than 700,000 people suffer a stroke each year, and nearly 450,000 survive with some form of neurologic impairment or disability,” NcNeill said. Those numbers will grow, he added, as the population ages and obesity and heart disease increase, making innovative rehabilitation programs “a national priority” in the next 50 years.

“Designing one is very much like creating an aircraft simulator to test and train pilots,” said Rizzo, who is currently a research scientist at USC’s Institute for Creative Technologies. “But now we’ve created simulations that can assess and rehabilitate a stroke patient under a range of stimulus conditions. These are conditions that aren’t easily deliverable or controllable in the real world.”

The haptics interfaces have descriptive names, such as “space tube,”
”pincher” or “mutual touch,” which tell users what they do. In addition, each cyber task targets specific eye-motor coordination skills and measures the user’s movements in real time.

“Pincher” is designed for two-fingertip contact with virtual objects, said Shih-Ching Yeh and Weirong Zhu, both computer programmers and graduate students in the Annenberg School.

The interface works like this: The user dons a pair of stereoscopic goggles and puts a thimble on the forefinger; the thimble is connected to a robotic force-feed device, called a PHANToM.

The stylus of a second PHANToM is affixed to the thumb. The two PHANToMs provide the sensation of force to the user’s fingertips as (s)he tries to pick up a three-dimensional cube and squeeze it small enough to fit through a narrow hole on the computer screen.

Another emerging interface is a “mutual touch” task which promotes hand-reaching and grasping. This therapeutic environment utilizes a “cyber grasp” exoskeleton, which fits over an instrumented data glove to measure the position and orientation of the hand in a three-dimensional space.

“The glove allows patients to feel the sensation of a solid object in their palms,” said Yeh, who develops some of the “special effects” computer graphics for the interfaces. “Among the tasks they might be able to perform are picking up a glass and inverting it to pour the liquid out or picking up books and stacking them on appropriate shelves.”

The interfaces give physical therapists precise control over a stroke patient’s exercise program, which is key to recovery, said Younbo Jung, another member of the team and a graduate student in communications.

“We can tailor rehabilitative tasks, like pouring milk out of a glass, to each patient, depending on what level of impairment they have sustained,” McLaughlin added. “We also get information on their performance instantly, which helps the therapist to design a rehabilitative program of increasing difficulty. “

In pilot studies at the USC Keck School � led by Carolee Winstein, professor of biokinesiology and physical therapy and co-principal investigator on the NIH grant, and Ph.D. student Jill Stewart � stroke patients are trying out these prototypes.

So far, they have reported “overall satisfaction” with all of the new cyber tasks, McLaughlin said. In one instance, a volunteer was “extremely enthusiastic about the space tube task and said she wanted to use the system at home.”

That desire is critical to post-stroke recovery.

“It’s not easy to keep patients motivated and engaged in daily, repetitive exercises,” McLaughlin said, “so if they are enjoying the tasks, they’re likely to do better during rehabilitation.”