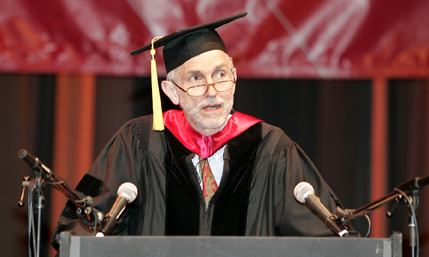 Zach Hall, former director of the Zilkha Neurogenetic Institute and senior associate dean for academic development at the Keck School, delivers an address at the Keck School’s 2005 commencement at which he received the Elaine Stevely Hoffman Service Award.

The Elaine Stevely Hoffman Service Award is given each year during the Keck School graduation ceremony in recognition of longstanding contributions and supreme dedication to the Keck School of Medicine and its people.

This year’s recipient of the Hoffman Award was Zach W. Hall, formerly director of the Zilkha Neurogenetic Institute and senior associate dean for academic development at the Keck School, and currently interim president of the California Institute for Regenerative Medicine (CIRM).

“Zach spent just three years at the Keck School of Medicine, but his impact will last for decades,” said Dean Brian E. Henderson in presenting the award.

“In his initial role as senior associate dean for research, Zach poured the foundation for a strong and thriving research community. He led the fledgling Faculty Research Council, molding it into an influential force guiding our ongoing recruitment efforts. And when I was asked to step into my current role as dean of the Keck School, Zach stepped forward and took over for me as director of the Zilkha Neurogenetic Institute,” Henderson said.

Hall has been a scientific leader throughout his career, taking on roles at the National Institutes of Health, where he directed the National Institute for Neurological Disorders and Stroke, and at the University of California, San Francisco, where he was key to the development of the 43-acre Mission Bay campus. He came to the Keck School of Medicine in 2002.

This spring, he became interim president of CIRM, the institute created by Proposition 71, the Stem Cell Initiative.

“Although he is missed here at USC,” Henderson said, “we know he is undoubtedly the right person to get that endeavor off to a successful start.”