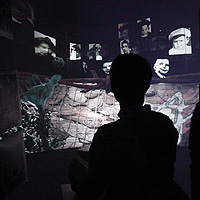 The USC School of Cinema-Television made history this spring when six students from the Division of Interactive Media ascended the proscenium at the Shrine Auditorium to receive the first degrees in interactive media ever conferred by USC.

As each of the newly minted MFA’s collected their diplomas, the ceremony underscored the growth of the discipline, which over the past eight years has evolved from a handful of classes to a full-fledged division with an endowed faculty chair, state-of-the-art labs and a reputation as one of the nation’s preeminent interactive programs.

“This is a tremendous moment for the students and for the division,” said division chair Scott Fisher. “The students worked incredibly hard over the past three years to turn their visions into reality. And in doing so, they played a vital role in developing the program itself.”

What began in 1997 as a single track in the School of Cinema-Television’s production division ballooned in 2002 into an independent division, offering an intensive three-year course of study in which MFA students gain exposure to the full spectrum of interactive experiences, from mobile media to immersive media to game design.

As for the present, an undergraduate degree program in interactive entertainment has been approved by the university’s curriculum committee for the division to begin this fall. The division also offers an undergraduate minor in video game design & management, done in conjunction with the USC Viterbi School of Engineering.

“The MFA brought the caliber up,” said Chris Swain, who started as a part-time instructor in 1999 and became a full-time assistant professor in 2004. “We had real faculty, real organization and students who actively sought us out.”

Third-year student Will Carter described the early days as a time of experimentation in which he felt a bit like a “guinea pig,” but he also felt like he had a hand in shaping the division.

“It was trying at times,” Carter said. “But to be able to come in and work closely with the chair and with the faculty was a real benefit that allowed for more flexibility.”

The division received a boost in 2004 when Electronic Arts, the world’s leading interactive entertainment software company, made a multimillion dollar investment in the future of interactive media education at the USC School of Cinema-Television.

With its cutting-edge technology, the EA Game Innovation Lab serves as a research space and think tank where new concepts in game design, play and usability are developed, prototyped and play-tested.

For the new grads, the future looks promising. “It’s a burgeoning industry and it’s only going to get more interesting,” said Carter, who had four job interviews in the weeks prior to commencement.

Likewise, the division’s future seems just as promising, with the official launch of a bachelor’s degree program this fall, continued updates to the facilities and equipment, and the expansion of the cross-disciplinary programs that the division has already initiated with other schools and departments at USC and beyond.

“Interactive Media � and by that I mean both the field and the division � are at a pivotal moment, much like the Internet was in the early ’90s,” Fisher said. “I couldn’t even begin to tell you what things will look like three years from now, but I do know these grads and the ones who follow will have a hand in determining that future.”