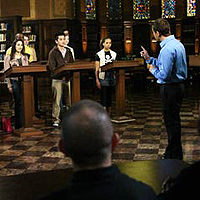 High school seniors compete for a full scholarship to the university of their choice.

Over the next few weeks, reality TV fans will get an intimate glimpse of key locations and buildings on the USC campus.

“The Scholar,” ABC-TV’s six-part series in which high school seniors compete for a full-tuition scholarship to the university of their choice, was filmed on and around the University Park campus.

In particular, the USC Libraries are prominently showcased in the program from Jaye Pace, who says she “wanted to harness the medium of television to raise awareness about the college admissions process.”

The majority of the show’s academic action takes place in the Edward L. Doheny Jr. Memorial Library and the James Harmon Hoose Library, located in the Mudd Hall of Philosophy.

Producers peppered the contestants with pop quizzes and team challenges all under the scrutiny of three watchful college admissions officers known collectively as “the Scholarship Committee.”

The sudden-death quizzes took place in Hoose Library, while the requisite interviews and “confessions” took place in Doheny’s Intellectual Commons and its Humanities Reading Room.

Footage also was filmed outside of Doheny Library and the Leavey Library, while the “graduation” ceremony � similar to the annual USC commencement celebration held each May � took place on the steps of Doheny.

While numerous locations have been used in one TV show or another, the USC libraries remain particular favorites for Hollywood.

Doheny Library, for example, has been featured in films such as “City Slickers II,” “The Graduate” and “Rising Sun.” Hoose Library was used in “Nutty Professor II” and “What Women Want,” and the Helen Topping Architecture and Fine Arts Library was a location in “The Girls’ Room.”

On the small screen, TV sleuths from “Charlie’s Angels,” “Remington Steele,” “Hardcastle and McCormack” and “Wiseguy” have snooped in more than a dozen of USC’s libraries.

According to Elijah May, USC’s campus filming coordinator, many of the 40 to 50 shows filmed each year come to USC because of its architecture and the stateliness of its facilities.

“Production companies really like filming at USC because it gives them that Ivy League look without having to go back East,” May said. “The libraries � especially Hoose and Doheny � have a classic look to them that enables them easily to substitute for universities like Harvard or Columbia.”

While production crews try to remain as unobtrusive as possible, there are times when filming does displace faculty, staff and students for a brief period of time. These disruptions, however, are viewed as part of a day’s work by many university personnel.

“While they [the production crews] may sometimes temporarily displace students and researchers, we make every effort to minimize their impact,” said Andrew Werner, director of facilities for the USC Libraries. “These shoots can be a challenge to schedule and manage but are worthwhile because they generate considerable funds, which go directly into improving library spaces for all of our patrons.”

Monies received from the production companies and studios help support the university in general.

After first covering the university’s costs associated with filming � such as fees for parking and payment for security personnel � the revenue generated supplements the USC Public Relations department. Excess funds each year go to the university’s general fund.

Filming of “The Scholar” � a show that Pace and ABC have claimed is the first to celebrate higher education as “the ultimate American prize” � was completed in February. (The scholars and production crew subsequently returned to campus in April to tape the show’s finale).

The grand prize is valued at roughly $250,000. Contestants have to demonstrate excellence in the areas of academics, leadership, creativity and community service while facing sudden-death oral exams in which they defend themselves before an Ivy League scholarship committee.

Episodes are scheduled to air Mondays at 8 p.m. on ABC through mid-July.

Even with their high IQs and exemplary GPAs, contestants have proved that no one knows everything.

In the first episode, Davis L., the self-proclaimed future president of the United States and a native of Memphis, Tenn., missed the question about who wrote the classic Southern novel, “Gone With the Wind.” (The answer: Margaret Mitchell.)

Perhaps the scholars would benefit from spending a bit more time in the library.

USC Libraries Star in ‘The Scholar’