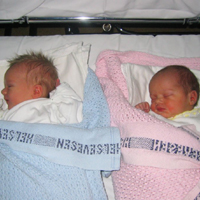 If one twin has the disease, a previous study found, his or her identical twin has a 60 percent chance of developing it.

A new study of dementia in identical twins suggests that exposure to inflammation early in life quadruples one’s risk of developing Alzheimer’s disease.

Margaret Gatz, lead author and professor of psychology in the USC College of Letters, Arts and Sciences, is slated to present her findings at the first Alzheimer’s Association International Conference on Prevention of Dementia held June 18-21 in Washington, D.C.

If confirmed, the link would add inflammatory burden to the short list of preventable risk factors for Alzheimer’s.

Previous studies by Gatz and others have shown that Alzheimer’s is strongly genetic: If one twin has the disease, his or her identical twin has a 60 percent chance of developing it.

Stroke and a short period of formal education both increase the odds of dementia, but not of Alzheimer’s specifically, the new study found.

Dementia is an umbrella term for many conditions, including Alzheimer’s.

“People can plan a life span that will alter dementia risk,” Gatz said. “And these aren’t risk factors that are unique to dementia. Many of these are also risk factors for other disorders. This is good news.”

Gatz’s team, which included researchers from the Karolinska Institute in Stockholm, Sweden, sifted the 20,000 participants in the Swedish Twin Registry for the 109 “discordant” pairs where only one twin had been diagnosed with dementia.

Information about participants’ education, activities and health history came from surveys they completed in the 1960s, when the registry was created, and from hospital discharge records.

The surveys included questions about loose or missing teeth. Gatz and colleagues used the answers to build a crude indicator of periodontal disease.

“We’re talking about gum disease, but it was measured by teeth lost or loose,” Gatz said. “It’s not perfect. Given it’s not perfect, it’s even more striking that it’s such a solid risk factor.”

The conclusion is not that good oral health can prevent Alzheimer’s, but that an inflammatory burden early in life, as represented by chronic gum disease, may have severe consequences later.

Gatz was inspired to focus on inflammation by the work of USC gerontologists Caleb Finch and Eileen Crimmins, who published a paper in the journal Science linking today’s record life spans to lower rates of childhood infectious diseases, such as gum disease, flu, rheumatic fever, tuberculosis and other illnesses.

Such diseases are often preventable, raising hope for prevention of Alzheimer’s.

“If what we’re indexing with periodontal disease is some kind of inflammatory burden, then it is probably speaking to general health conditions,” Gatz said. “There was in our twins quite a lot of periodontal disease, and at that time in Sweden there was a lot of poverty.”

The study, titled “Potentially Modifiable Risk Factors From Dementia: Evidence From Identical Twins,” also found that mental activities at age 40, such as reading or attending cultural events, did not seem to lower the risk of developing Alzheimer’s.

Participants who had more education than their twins were at slightly lower risk of developing dementia, but the influence of education on Alzheimer’s risk was statistically negligible.

“Once one controls for genes, the level of education is not a huge risk factor,” said Gatz, who questioned popular attitudes linking Alzheimer’s or dementia to mental inactivity.

“We go around saying, ‘Well, it can’t hurt to do crossword puzzles.’ There is a way it can hurt,” she said. “The way it can hurt is if we start blaming the people who are demented for not exercising their brains enough, or overselling activities that could make a difference where it’s really unsubstantiated. I think we have got to be real careful in our messages about risk reduction.”

The research for this study was supported by grants from the Alzheimer’s Association and the National Institute on Aging.