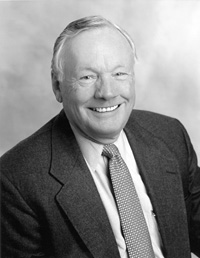 USC alumnus Neil Armstrong, the first person to walk on the moon, is this year’s commencement speaker. During the commencement ceremony, Armstrong will also receive an honorary doctor of humane letters degree.
The man who immortalized his footprint on the moon’s dusty surface with the memorable remark “one small step for a man, one giant leap for mankind,” has distinguished himself as a skilled pilot, a brave and innovative explorer and a dedicated citizen, educator and war veteran.
Taking manual control of the Eagle in order to avoid the moon’s rough terrain, he calmly guided the Apollo 11 lunar landing module to a safe landing on July 20, 1969, as hundreds of millions of television viewers from around the world watched in awe.
The safe return of Armstrong and his two fellow astronauts to Earth completed President John F. Kennedy’s 1961 challenge that America launch a journey to the moon and back by decade’s end.
The Ohio-born Armstrong became enamored of flight as a child, earning his pilot’s license before his driver’s license, creating an experimental wind tunnel in his family’s basement and building hundreds of model planes.
He flew 78 combat missions as a naval aviator during the Korean War; served as a research pilot on pioneering aircraft, including the 4,000-mph X-15 rocket plane that propelled him to the edge of space; and commanded the 1966 Gemini 8 mission that marked the first manual docking of two spacecraft in orbit.
Widely respected for his decisiveness, courage and calm demeanor under intense pressure during the Apollo 11 mission, he advanced scientific and technological research as a NASA administrator; as a member of government commissions, including a panel investigating the explosion of the space shuttle Challenger; as a professor of aerospace engineering at the University of Cincinnati; and as a business leader.
After graduating from Purdue University in 1955, Armstrong began pursuing a master’s degree from USC through an extension program while working as a test pilot at Edwards Air Force Base. He joined NASA as a civilian astronaut and was awarded his master’s degree in aerospace engineering from USC in 1970.
Among his many honors and awards are the Presidential Medal of Freedom – America’s highest civilian award – and the Congressional Space Medal of Honor.
Purdue, where he earned his bachelor’s degree in aeronautical engineering, named a new engineering building in his honor. A space museum and airport in Ohio also bear his name.
He is a member of the National Academy of Engineering and has served as chairman of the board of trustees of the Cincinnati Museum of Natural History.