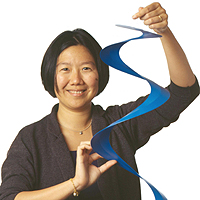 Chew is an assistant professor of industrial and systems engineering.

“David, Muhammad and Elaine have demonstrated exceptional distinction in their fields and shown unparalleled promise for breaking new ground in the future,” said Yannis Yortsos, dean of the USC Viterbi School, in announcing the new appointments.

D’�rgenio joined the USC faculty in 1979. From 1993 to 1995, he was associate dean for academic affairs in the Viterbi School of Engineering and, from 1996 to 2003, he was chair of the department of biomedical engineering. He also was interim director of the Alfred E. Mann Institute for Biomedical Engineering from 1998 to 1999.

D’Argenio is co-director of the Biomedical Simulations Resource. His research focuses on the development of advanced modeling and in silico methods for studying the absorption, distribution and elimination of therapeutic drugs, and for understanding how drugs produce their effects.

Drug development researchers in pharmaceutical companies throughout the world use his methods.

He is a member of the FDA Clinical Pharmacology Subcommittee and is on the board of directors of the House Ear Institute.

He is known worldwide for his contributions to the understanding of the properties of heterogeneous materials, fluid flow in porous media with applications to oil and gas recovery, and the development of techniques for large-scale scientific computations and atomistic simulations.

He has also made major contributions to the engineering of reaction and diffusion systems, separation processes and the dynamics of biological systems.

He has published more than 210 papers in peer-reviewed journals, written four books and authored several invited reviews and book chapters. He is also the recipient of a Humboldt Research Fellowship Award and the Khwarizmi International Award for Distinguished Scientific Achievements, sponsored by UNESCO.

She earned a master’s degree and Ph.D. degree in operations research from the Massachusetts Institute of Technology, a bachelor of arts and sciences degree with honors in music and mathematical and computational sciences from Stanford University, and diplomas in piano performance from Trinity College, London.

Chew’s research focuses on applications and mathematical models for music computation and cognition.

She is a recipient of the NSF CAREER Award and this year’s Presidential Early Career Award for Scientists and Engineers “in recognition of her research on performer-centered approaches to computer-assisted music making, and for her efforts to integrate research and education at the intersection of music and engineering.”

She has also been a recipient of the Josephine de Karman dissertation award, MIT’s Weisner Award for contributions to the arts and an Office of Naval Research Graduate Fellowship.